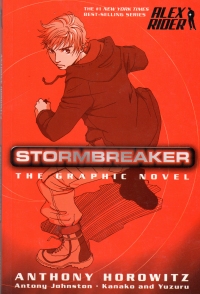 This book is apparently the graphic novel adaptation of the screenplay of a young adult book (or so the Internet says). So it’s a graphic novel, but with a plot of something other than a tournament of magic, pocket monsters, or whatnot. So it’s not manga.

Alex Rider is the nephew of a secret agent, and when that secret agent dies, the controlling agency takes an interest in Alex who has been groomed as a secret agent from an early age. Out of options, they insert him into the mansion/complex of a wealthy technology entrepreneur who is offering to donate thousands of new virtual reality computer systems to schools across the UK. Although initial clues indicate each machine might include a computer virus, the plot is to release an actual virus into the schools to kill hundreds of thousands of children. Because, evil.

Alex stops the plot and gets the girl.

It’s about par for the graphic novel course, and were I inclined to share this with my children, there’s apparently a whole series of books out there with Alex Rider as the hero. Young adult books without wizards, vampires, or some other supernatural element that sets the hero apart from mere mortals? I was not sure such a thing was done in the 21st century. Maybe I will share these books with my boys after all.