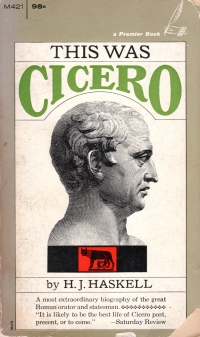 This book is nominally a biography of Marcus Tullius Cicero, but in reality, it’s a history of the fall of the Roman republic wherein Cicero sometimes makes appearances. I guess the author was working from a lot of Cicero’s letters (as do so many historians from Plutarch on), so he focused on Cicero. But there are huge stretches of the book where Cicero is not mentioned at all, including the first couple of chapters.

The author is a Marxist, of course. He refers often to the proletariat in Rome; he defends Catiline because Catiline was in favor of redistributing the wealth; he name-checks the poor oppressed Sacco and Vanzetti; he touches upon themes and books mentioned in Books That Changed America (namely, conservative opposition to public schools and The Influence of Sea Power Upon History, 1660-1783 by Alfred T. Mahan referring to either Pompey or Caesar’s understanding of naval transport of armies); and he often equates good with progressivism/Marxism and bad/corruption/know-nothing aristocracy with “conservatives.” But he’s an early twentieth century Marxist, so it’s lacking in the invective you get in later works.

As I mentioned, the author spends a lot of time talking about things other than Cicero, and he spends a lot of time equating the lives of Roman citizens in Cicero’s lifetime to different periods in history, including seventeenth century England and modern (~1940) America. The comparisons are probably too facile, especially when trying to equate the political groups of the period to modern equivalents (which boils down mostly to Tories/Republicans/Old Senate Factions = bad, Democrats/Redistributionists/Caesar and anyone shaking up the order to make it fairer for the proletariat = good). However:

This is still a pretty good book to read. It is pretty in-depth coverage of Roman history during Cicero’s lifetime, which includes the First Triumvirate and the Second Triumvirate and the Civil War from a different perspective than Julius Caesar. It’s the story of one man with hopes of a restoration of the Constitution that never comes and the slow, continued dissolution of the ideal of the Roman Republic from an ideal state that probably never existed to the seeds of empire based on strong, charismatic men with armies ruling.

It also provides a good deal of context for Cicero’s orations and his other works, including the historical details of why and when the pieces were written. Reading a collection of Cicero’s words will get you a little context, but this book fills in all the gaps.

The author does not paint a flattering picture of Cicero, though. The subject of the book, when he appears, is presented as vacillating, vain, vainglorious, and too much in love with his own oratory. Also, Cicero, in this book, seems to think his words alone could counter armed insurrections of various stripes. A tale with modern parallels.

I enjoyed the book and learned a bunch from it. It’s not without its flaws–politics aside, it does give the subject a bit of short shrift and it has a tendency to draw back from a point in time to provide historical context which gives the reader a bit of whiplash–but informative none the less.