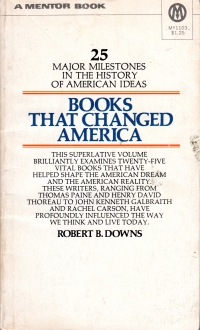 This book should have a red cover. Its title should be Books That Advanced The Socialist Agenda for America.

How red is it?

Many of the evils of Bellamy’s day have been eliminated or mitigated in the eighty years since he wrote Looking Backward, and reforms which he advocated have been incorporated into the nation’s laws. The closest modern equivalent in organization to the state-controlled society proposed by Bellamy is Soviet Russia, where numerous obstacles have stood in the way of a fair test. [Emphasis added.]

That is, the socialist Utopia dreamed of in a nineteenth century novel is best represented by the Soviet Union, but its implementation was flawed by “obstacles.” Numerous obstacles. Not that the theory itself was flawed; no, there were numerous obstacles.

It takes one 129 pages into the book before we get confirmation that we’re way down the rabbit hole, Alice.

I mean, one could get the sense where the author’s sympathy lies in how he slaps around the word “conservatives.” Like when describing the book Experiments and Observations on the Gastric Juice, and the Physiology of Digestion: conservatives doubted the published observations of this unschooled army doctor presented with an improbable test subject. Not scientists or skeptics: conservatives doubt this. So it goes.

Here’s the selection of books. Note how it starts out with books in the canon we can agree are classic and then veers into leftist treatises:

Here are some choice quotes from the book. They start later in the book, as it took me a while to get incredulous enough to cite them. Note: I did not “dialog” with this text by marking up the book itself. Nor did I throw it, even though it is a paperback (because I’m mellowing, and because I read a large part of it in church).

From the chapter on Medical Education in the United States and Canada (p176):

On the basis of his first quick overview, Flexner concluded that the country needed fewer and better doctors and one way to get them was to produce fewer.

From the chapter on The Nature of the Judicial Process (p234):

The position of property under the law is clarified by Cardozo. He points out that “property, like liberty, though immune under the Constitution from destruction, is not immune from regulation essential for the common good. What the regulation shall be, every generation must work out for itself.” Property has a social function to perform and legislation toward that end is an appropriate exercise of government power.

All your base are belong to the government for the social good.

From the chapter on Middletown (p246):

Middletown is “clubbed to death,” beginning with the young people in school and contiuing for the rest of their lives. Represented among 458 clubs are numerous women’s organizations, church societies, the Rotary Club and its rivals, the Chamber of Commerce, the lodges of the secret orders bearing fantastic names, the YM and YWCA, the Ku Klux Klan.

Uncontrolled, voluntary association of citizens according to their interests, beliefs, and service inclinations is dangerous. And they’re all equivalent to the KKK.

Romanticism and escapism also account for the South’s religious patterns, as seen by Cash. The Southerner’s “chief blood-strain was likely to be Celtic–of all Western strains the most susceptible to suggestions of the supernatural.”

Got that? Southerners must be grouped together and dismissed because of their ancestry. Because they’re racists.

From the chapter on The American Dilemma (p266):

For social reasons, the author strongly advocates voluntary birth control by Negroes in order to relieve the poverty of the Negro masses, to protect the health of working mothers, to reduce the high disease rate, especially from venereal cases, and to decrease the extremely high illegitimacy rate among Negroes. Stated broadly, “the reasons for birth control among Negroes is due only to the fact that, as a group, they are more touched by poverty, disease, and family disorganization than is common among the whites in America.”

That is, instead of implementing policies that help people, let’s just have fewer people of a certain racial group because they need help. This is compassionate to some people. I should note that these people are not the conservatives I hang around with.

At any rate, I hated the book and what it tries to pass off as good and progress. On the other hand, I’m glad I read it because it gives me some insight into a bunch of unfortunately influential books that I’ll probably not read in their entirety. Also, it underlines and dismays me how long the poisonous political atmosphere has run under the surface of mainstream consciousness. This book is from 1970, and it’s a Mentor edition, which probably means it was a college textbook in the 1970s. And it highlights some progressive thought from before then, but it pronounces it as unalloyed good while almost hiding its bias. This itself is a piece of propoganda and not a collection of books balanced at all.

So I’d recommend it only if you’re sadistic or really want to see how this material has been framed and taught for generations.