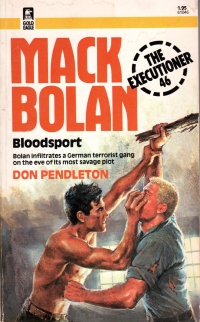 This book finds Mack Bolan in Europe, where he is looking into the disappearance of a number of Olympic-caliber athletes, including a martial arts expert, a skier, a gymnast, and a fencer. Bolan infilitrate a West German terrorist splinter group to stop whatever plot is afoot and to rescue the hostages if they’re still alive.

The book was written less than ten years after the Munich attack in Germany, so its plot was almost based on real life events. The book runs smoothly from set piece to set piece, including the disruption of an arms deal and Bolan posing as a fugitive United States Army pilferer and dealer of stolen goods to infiltrate the terrorist organization. Unfortunately, its plot ultimately is too ripped from the headlines and the pacing again turns abrupt as the word count nears novel length.

Still, by pacing the books out a little more (although this is the thirteen Mack Bolan book I’ve read this year, it’s the only one in a month’s time), I enjoy them a little better as time smooths the disparities between the different authors. And I am reading these for enjoyment, not some project to educatedly discourse on men’s adventure fiction. Well, okay, I do have a goal of someday reading the set I received for my birthday a couple years back, but they’re enmeshed in the larger collection I’ve picked up since then. So they’re a Quixotic quest involved. But it’s still 80% enjoyment.