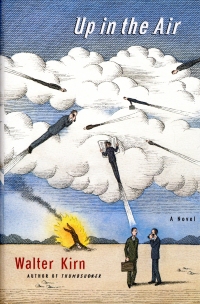 This book is the source for the George Clooney film of the same name, but a quick perusal of the film’s plot indicates they differ widely.

In this book, a business consultant whose job it is to counsel laid off employees across the country is nearing a million frequent flier miles on an airline. His employer has given him pretty free rein to travel the country to meet with clients, and the consultant also travels for some pleasure and for some of his side projects. He’s left a resignation letter on his vacationing boss’s desk, so in a week he’ll be out of a job. But he should make the million mile club before then, before they cut off his company credit cards.

He’s been travelling like this for many years, and he’s got no home but the series of airports and hotels he calls Airland. He’s got his own set of rules and expectations from other business travelers, and he’s working on a book with it. He also thinks a secretive consulting company might be trying to recruit him through a series of tests and contacts with his clients and friends.

It starts out a lot like a Stanley Bing novel (see Lloyd What Happened and You Look Nice Today). A bit wry, with an obviously unreliable narrator. However, over the course of the book, it becomes clearer just how unreliable the narrator is: he’s having a breakdown of some sort, or perhaps an entire psychotic episode where none of it really happens.

Which is unfortunate: I would have preferred a better payoff for what was a pretty engaging narrative and voice.

As I finished it, I didn’t think it would be the sort of character George Clooney would play, so I’m sort of interested in seeing the film now to see how little they overlap. And it’s definitely possible I’ll like the film better than the book.