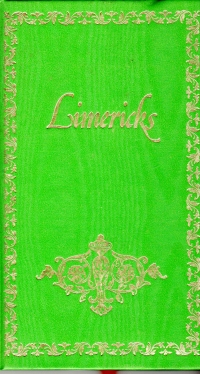 This book is just what it says: A collection of limericks, the five line poem type.

The book contains 212 limericks by Edward Lear, the English writer who popularized the form. His limericks are a bit of nonsence, and the fifth line pretty much just restates the first line without the clever twist that later limericks employed. So we get things like this:

After the main course of Lear, we get 28 limericks from Punch magazine and then 20 other limericks. These last 48 are in the contemporary form with a little more punchline to the last line, but none of them stuck with me or inspired me to memorize them and tell them to others.

I’m not really consumed with the urge to try out the form, either.

So skip this book unless you’re a real scholar on poetry forms or want something to browse through during football games and don’t mind re-reading the same limerick a couple of times because you’d forgotten you’d read it before third down.