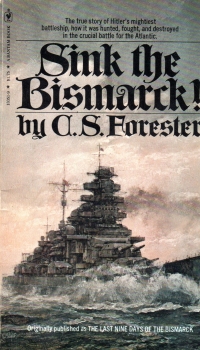 Suddenly, I’m on a World War II naval battle kick, first with The Battle Off of Midway Island and now this book. What a contrast they make.

This book, originally titled The Last Nine Days of the Bismarck but retitled after the 1960 film Sink the Bismarck! came out went through quite a number of printings; this paperback is still in print 20 years after the original and 38 years after the events depicted in it. What kept it alive? Past generations’ interest in actual history? The movie in heavy syndication on television that had not fragmented into a billion channels? Perhaps both, maybe neither. But I’m prone to idle speculation.

The difference in naval doctrine is stunning. Although I’m no naval military history expert, the book might capture a turning point in naval operations. The Bismarck is a big battleship with big guns that knocks out a British battleship (the Hood), and then goes around the Atlantic for a couple of days. Will it harry shipping? Although that might have been the idea, it does not engage shipping and starts making a beeline for France when it’s clear that the British aren’t cowed and are actively hunting it. This might represent the 19th century way of naval war.

The British, on the other hand, bring the house. They have a number of cruisers, a carrier, and whatnot working together to target the single battleship. This is more akin to what we’re used to in modern warfare and, indeed, reflects more of the strategy of the battle of Midway that will come only a couple years later.

I’m probably over simplifying it, but the claim seems valid to my layman’s eyes.

The book is a partially fictionalized retelling, as Forester recreates conversations that he can most assuredly not have access to. It does make this book approachable and readable, but not academic history. The book clocks in at only 118 pages, too. Remember the days when paperbacks were only 150 pages? Heck, I remember the days when hardbacks were only 180 pages. But then price inflation meant they had to make them fatter to justify higher prices–compare to portion sizes at restaurants–but there was something to be said for a quick, informative read like this. Back when people read.

It’s worth a read. I might even want to see the film now to see the movie-ized version of a fictionalized historical incident looks like.