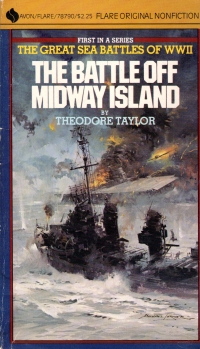 This book is a young adult history book. About World War II. Whoa, we are looking at an artifact here, aren’t we? Nowadays, it seems from the news that all young adult books are sparkly vampire dystopian fantasy bestsellers because adults read them or gritty real-world-of-fevered-dreams fests of sex and drugs that teenagers really deal with in books that teenagers read because they’re told to and only become news stories when someone wants to remove them from a school reading list.

I mean, in 1981, someone expected young readers to read about American history? Like battles and stuff, not about how America sux? I’m having trouble wrapping my mind around it. And this book is touted as the first in a series.

At any rate, I only remembered the basics of the battle before reading the book: Big deal, many Japanese carriers sunk, turned the tide of the war. Given that I know that much, it’s clear I’m not a 21st century young adult.

The books is short–135 pages–and it really only gives an overview of the events after the Coral Sea battle, where the Japanese hoped to lure out the remainder of the American fleet to destroy it, but the Americans had broken the Japanese code and managed to get the drop on them. Then, through (and sometimes in spite of) sacrifices and ill-fated bombing runs on the Japanese carriers, the Americans break the Japanese fleet.

It’s not a jingoistic book, and it’s not an academically detailed book, but it does blend striking moments with the ebb and flow of the engagement, so a (young adult) reader isn’t overwhelmed but does get a sense of warfare. Except when talking about the pilots, one does not realize how young these guys are.

So I enjoyed it and read it quickly, and I’ll be honest, I come out of it knowing only a little more than I had before–knowing which American carrier sank during the engagement and whatnot–but every little bit makes me a bit smarter, so I’ll take it. Combining this book with a recent viewing of The Karate Kid Part II sent me to the globe to relearn some of the topography of the Pacific Ocean, and I’d forgotten where Okinawa is in relation to Japan and where Midway Island(s) is relative to Hawaii. So the book has done me some good indeed.

I’m almost interested to the other books in this series.

1 thought on “Book Report: The Battle Off Midway Island by Theodore Taylor (1981)”