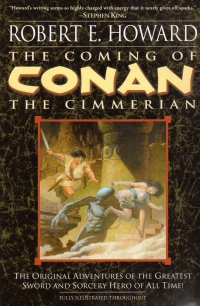 Ah, now this book is a little more manly that decoupagistry.

This book is the first of a three-volume set that includes all of the Conan stories in the original order, which is to say not chronological order according to Conan’s point of view. Howard wrote just a bunch of stories from Conan’s life with a handy history guide he created after a couple of the stories.

For those of you who don’t know, the Conan stories are set in a prehistoric age called the Hyborean Age wedged between the fall of Atlantis and the rise of our recorded civilizations. They’re centered around a land mass similar to Europe, but different enough. Conan is a king fighting assassins, a pirate, a mercenary, and a bunch of different things as he swashbuckles through a series of adventures that are fresh enough in the beginning, but at the end of the volume start to become just a touch formulaic. As they would, being the inspiration for many knock-offs we’ve all seen in film since then and have read other stories (Brak the Destroyer, I’m looking at you–John Jakes endorses the Conan stories with a quote on the cover, and he’s identified as the author of North and South, but I remember him most as a writer of a couple of collected volumes of stories similar to this).

It’s definitely sword and sorcery, as the gods, demons, and summoning make up many parts of plot points. Some of the descriptions are even Lovecraftian–and it comes as no surprise, as Howard and Lovecraft corresponded and worked for the same editors and magazines. Conan stories are a bit like Lovecraft stories where humanity gets to hit back.

In addition to the stories, there are a couple of introductory and academic essays explaining the Importance of Howard and a bit of his writing chronology. They’re okay if you don’t take them too seriously and don’t mind skipping past it. I don’t know why I want my actual histories to be written by homers who appreciate and somewhat applaud or respect their subject, but I get a little irritated when editors and literature majors do that with fiction.

The book also includes the aforementioned history of the Hyborean age that Howard wrote to keep his notes and stories straight, some maps in his hand, and some fragments and drafts. It also includes his first draft of his first Conan story. When you compare them directly, you get a pretty good sense of how editting can improve writing. I’m a poor editor, as readers of my books can attest, but this example offers a stark example of the benefits.

So I enjoyed the book, but given its length and the fact that it is short stories means it took me longer than I would have liked to have read it. So although I own the other volumes, I don’t expect to dive right into them immediately. But I look forward to them.