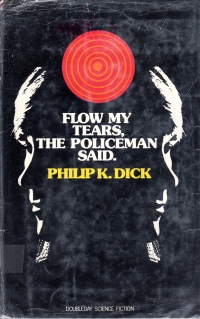 There’s nothing like a Philip K. Dick book to pick you up when you’re feeling down. Personally, I picked this book up at a book sale sometime recently, as it’s an ex-library book with Christian County Library stamps on it. I’m always happy to grab a used book from this master, as you don’t see many of them out in the wild. Because they don’t want you to have them.

A popular television personality with a weekly audience of millions finds himself a victim of attempted murder by one of his lovers; the next morning, instead of dead, he finds himself in a seedy residential hotel with his roll of money but no papers, and nobody from his previous life knows who he is. He has to rely on his wits to survive, and it’s fortunate that he’s a Six–the product of a genetic experiment of some sort that makes him smarter and more charismatic than normal man. He hooks up with a document forger since he lacks papers in a totalitarian society, but the forger is an insane police informant. He then hooks up with the sister of a police detective who winds up dead while he’s drugged. Naturally, he falls under suspicion and might be used as a patsy by The Powers to spare political discomfort. And he might or might not have been given a weird drug that dilates time or warps the perceptions of space.

So, yeah, it’s got some plot holes in it. Like, many. But it’s a Philip K. Dick story, which is always fun to read because the rules don’t apply. They’re fantasy stories more than science fiction, you know. So you suspend enough disbelief that only at the end do you think, “That point doesn’t make sense.” And you don’t even mind.