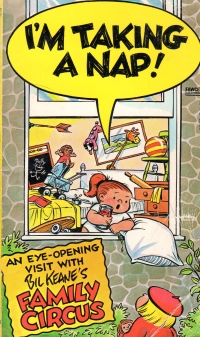 According to my research, I haven’t read a Family Circus book in four years. According to my initial calculations, I thought 2009 was three years ago; however, damn, that is, in fact, four years. Where are they going? Slowly from the ever-expanding to-read shelves to the read shelves. And more, sometimes, but we’ll get to that.

This book was initially copyright in 1971, but this is a printing from 1984. In a third edition of sorts. Ponder that for a while: these books were popular enough to go through several editions. Do you see that in modern cartoons not named Dilbert? I dunno, I don’t even read the funny pages of the local paper.

This is early in the Family Circus life: you can tell because the father starts out without glasses, and there’s a gag when he gets his glasses. In all of my living memory–which is appropriate, since this book came out before I was alive–he’s had glasses. I didn’t notice until the glasses panel that the father was without, which is a comment to how closely I study the panels before reading the punchline, I suppose.

At any rate, amusing at best, but an exploration of domestic life with a family from the last bit of the middle of the last century. A worthwhile browse for me because it reminds me of my youth, when this stuff was fresh, and it filled time between plays in a series of sporting events, but I’m sure these things won’t get multiple reprintings in the future.

Although I see some of the syndicates are putting out presumably print-on-demand editions such as this and this to have one more crack at the fan base. Good on ’em.