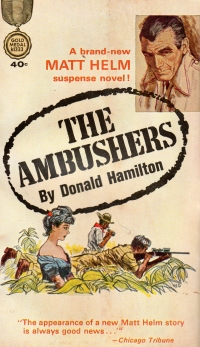 It’s been a while since I read a Matt Helm book (four and a half years, apparently). This book has two bits in it: Matt Helm goes to a Central American country to knock off the leader of an insurgency tied to Cuba and the Soviet Union. When he does, he sees that the insurgents have somehow gotten their hands on a road-mobile medium range nuclear missile which Helm doesn’t have the ability to disable or destroy as part of his mission. He also rescues another agent who is a basket case after torture and rape.

When he returns, he finds that the upper levels of the bureaucracy are disappointed in the results of the mission, as the missile might have fallen into the hands of a government nominally American-friendly. He drives cross country to a southwestern recuperative facility with the basket case. After a day at the facility, she’s less of a basket case and wants out–so he takes her onto his next mission, seeking out a Nazi war criminal plotting some sort of insurrective event from Mexico. He finds a pair of operatives from another country working to look for the fellow themselves, and he crosses and double-crosses them as they cross and double-cross him in the pursuit.

You know, this book was eighteen years after the war. Nazis as bad guys were believable. The book seems less dated, strangely, because Nazis have been the go-to bad guy in popular culture for seventy years. Can you imagine a movie from the 1970s where the bad guys were the Spanish monarchy? I think not.

Still, the book is a very good change of pace from the Executioner novels. Looking back, I see I bought this almost two years ago in Bolivar. Huh. I’ve read a number of books from that book fair already. Mostly the paperbacks.

This blog is getting to be close to ten years old now. And mostly it serves my nostalgia for books I’ve read and where I bought them.