Here’s a twelve question quiz about guns and the right to bear arms from the Christian Science Monitor. (Link seen via Hell in a Handbasket.)

Go on over and take it, and we’ll compare scores.

I got 11 of 12. The one I missed is the one commonly missed by James Rummel’s commenters, question 10: 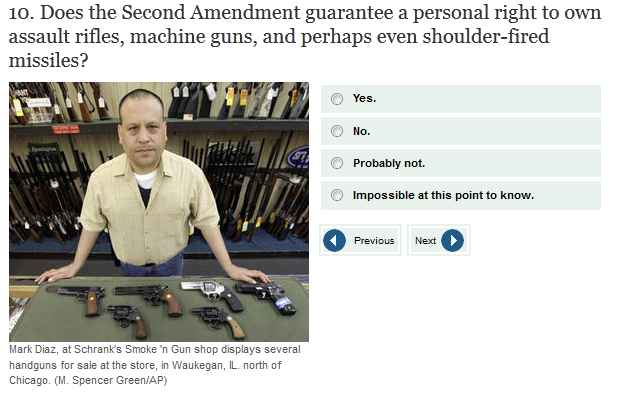 The question text is “Does the Second Amendment guarantee a personal right to own assault rifles, machine guns, and perhaps even shoulder-fired missiles?” and the answers are Yes, No, Probably not, and Impossible at this point to know.

The “correct” answer is “Probably not.”

Therein lies the rub. Wherein all the other questions here are pretty straightforward, this one is open to interpretation of what the question means, but also what it questions.

I’m not familiar with court law to know off the top of my head if these have ever been challenged all the way up. So if the question is “Is there any legal precedent….” then I don’t know. However, if it was, I would expect the answer to be “Yes” or “No” along with some explanation. But “Probably not” would seem to indicate that the question really is about divining the intent of the authors of the Constitution.

Which is dangerous territory, especially for the facile journalist who wrote this question.

The serious founders of our nation might not have given a whole lot of thought to the science fiction weaponry developed in the intervening centuries. Mechanical contraptions impervious to musket balls (except in some of the games of Civilization I’ve played, dammit) that can launch explosives miles away? Flying machines with Chinese toys laden with gunpowder to launch at defensive fortifications? Rockets that can travel faster than a shout? They weren’t trying to game out scenarios hundreds of years in the future and a thousand times more advanced than the differences between Julius Caesar’s arms and those born by Christian crusaders a thousand years later.

When the Constitution was written, the “arms” held by the militia were very close to the arms held by the professional armies. Leaving aside whether the intent was to counter the professional armies of the country’s rulers, if the militia were designed to counter foreign threats like the Anglo-Saxon fyrd from which the English militia derived, those militia should have the latest and greatest weapons to successfully counter a Canadian invasion. The amendment says arms, not arms except for an eighteen pounder.

So how do you think the founding fathers would have felt about an underarmed militia and professional armies and law enforcement agencies? Probably differently than the journalist does and would expect them to.