You know what makes me feel left behind? When I encounter a set of signals, sigils, or glyphs that I don’t recognize nor understand. I’m a pretty smart guy. I have a college degree, although perhaps in the 21st century having a college degree is a symbol of not being very smart at all, particularly when it’s a B.A. with majors in English and Philosophy. But, still, I feel like a stranger in a strange land when I come upon something like this: 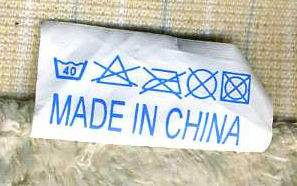 That’s the bottom of our dust mop cover. I took it off to launder it. I think the package might have said it was washable. Something I own is washable, so maybe this is it. So I looked for the tag that explains what one can do with it, but all I had was this.

The first one looks like a tub, so maybe that means it’s washable. But what does the 40 mean? I should use a tallboy can of beer? I should wash it just above freezing? I have no idea. It goes into the white load with the rest of my formerly whites.

The second symbol: A triangle, prohibited or eliminated. Do not listen to The Dark Side Of The Moon while washing?

The third symbol: A tank? This garment will not protect you from authority when you’re at a protest?

The fourth symbol: A circle, x-ed out. A cryptic reference to The Rolling Stones’ “Paint It Black”?

“I want to see the sun blotted out from the sky.”

The fifth symbol: A circle in a square, x-ed out? Wait a minute, maybe the circle does not represent the sun, but rather an elder god or demon of some sort. And this is some sort of warning about containing that eldritch feotid beast from beyond the laundry room. Like an Elder Sign, if only I could decipher it.

Ah, the hell with it. I threw it in the laundry with some malt liquor and then the dryer. I have no idea how many of these important Chinese tenets I violated, but I have a mostly clean dust mop head. The point was not to clean it correctly; the point was to invest enough time ranting about it while seated at the computer with a cup of coffee that I would not have time to actually use the dust mop. Mission: Accomplished.

(And in the course of researching the post, I encountered this list of the symbols and what they mean. In addition to a rant post, I have also learned something that will impress my wife when I someday dramatically interpret a set of glyphs for her. “How do you know that?” she will ask, and I will just shrug. But you and I know, gentle reader.)