This is Geoffrey Grasshopper: 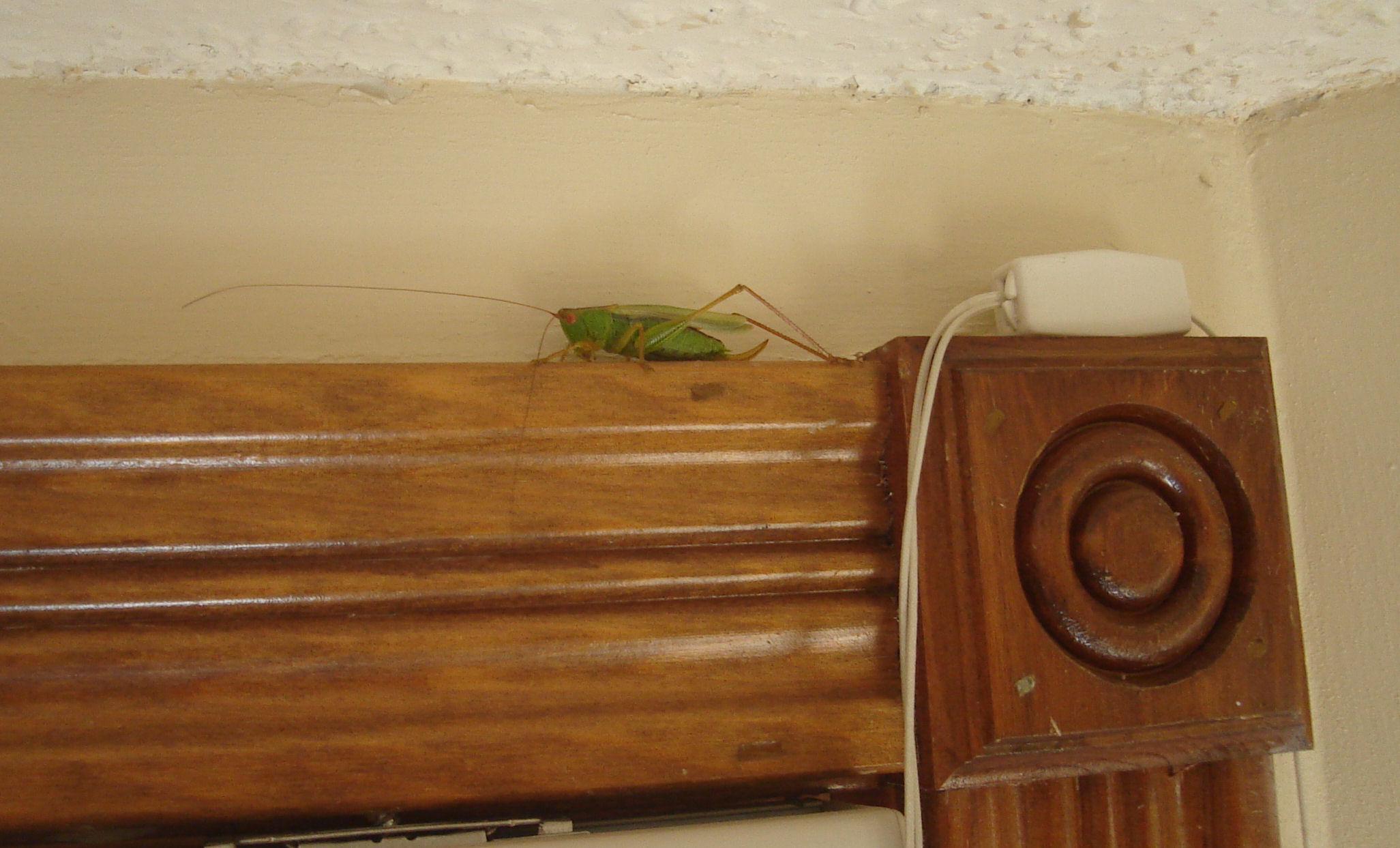 My children were thrilled to see Geoffrey climbing up the window screen in the dining room where earlier they had seen a praying mantis do the same thing. Geoffrey, however, to their added delight, was inside. They thought he was a cricket, though, thanks to multiple readings of Mouse Soup.

He crawled to the top of the window, as depicted, and hung out for a day. As the Father, I had to take some action.

There is no grass in the house for Geoffrey to eat. Therefore, if left in the house, he would starve to death slowly in front of my children’s eyes. If it were summer, this would pose no problem, as I’d toss him outside and let him live his life as a grasshopper. But now the nights were dipping to freezing, and Geoffrey would probably not last the night.

To live longer, but suffering, or to die quickly but as a grasshopper. This was the dilemma that Geoffrey faced, although he did not know it. I would make the decision, I would determine the manner of Geoffrey’s death.

I know, you’re saying that it’s just a damn bug and I’m making too much of it. You don’t understand: My boys had seen this bug. I would have to explain the decision to them in moral and practical terms.

It is only a bug, so killing it is not exactly a mortal sin, but I’m trying to teach my children to respect life, even bugs (if possible, although flies, fruit flies, and anything in the house is fair game because…. well, I haven’t articulated that very well). Although dogs are nice and alive, it’s okay to kill them if they threaten your life, for example. But this grasshopper (or the bugs in the house) don’t really threaten your life directly….

This children thing is very complicated. And I’m supposed to be some kind of moral philosopher who can explain these things.

So I captured him in my hands and my wife held the door while I tossed him out onto the deck in the afternoon sunshine. He landed, dazed, and one of our outdoor cats pounced on him and ate him.

Well, not really that last part, as two of our outdoor cats started out as indoor cats and have lost even their bug-hunting prowess. Geoffrey must have hopped off as he’s gone from the spot now and has probably passed away from the autumn evening temperatures.

As a father of two who must know right from wrong in all circumstances, I bear the burden of Godhood to insects pretty heavily. The big moral things are easy. The minutiae can be tricky when it has to exemplify larger lessons.