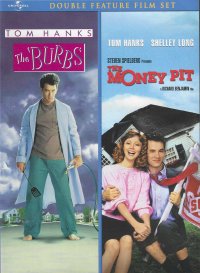 This is a two-pack of Tom Hanks comedies from the middle 1980s. Remember when Tom Hanks made comedies? Try explaining that to young men born in the 21st century. Ever since his back-to-back Academy Awards in 1993 and 1994, he’s pretty much been a serious actor. No cross dressing for laughs, as in television’s Bosom Buddies–I am pretty sure that show could not be made today at all, and I bet if I dug, he has probably retcontrited for forty-year-old humor. But I digress.

The Burbs tells the story of a man taking the week off from a high pressure job and just hanging out in his cul-de-sac when he begins to suspect his new neighbors are evil. With the help of a couple of neighbors, he investigates after a fashion and suspect the neighbors have killed another neighbor. They hijinkily try to prove that the neighbors have murdered him but not his little dog, but just as Tom Hanks’ character is about to accept that their intrusions and suspicions are causing more problems than they’re detecting, their suspicions are proven correct.

The movie has an all-80s-star cast, including Carrie Fisher as Mrs. Tom Hanks, Bruce Dern, Rick Ducommun (whose special I’d seen on Showtime and who would later appear in Groundhog Day as Gus), Henry Gibson (whose looks somewhat like Marshall Applewhite of Heaven’s Gate infame would have helped if only this film had not come out 8 years before that cult killed themselves), and Corey Feldman as the local teen who stands aloof and likes the show. It’s funny: The film came out in 1989, by which time we were living down the gravel road, so it is not one that I would have watched over and over on Showtime, although I think of it as such. However, we did have a movie poster for it, or rather a video store poster of it–a local video store would give us old posters, and we hung them on our walls, my brother and I. So perhaps I remember the poster of it and only later watched it over and over, perhaps at my father’s house when I was in college. And perhaps “over and over” is once or twice.

I watched this film with my older son, who thought it was okay.

The Money Pit is actually an earlier film, but might be slight less remembered than The Burbs. In it, Hanks plays a record company/band management guy dating a woman in the symphony (Shelley Long) who is the ex-wife of a maestro (Alexander Godunov) whose apartment they’ve been living in. When the maestro returns suddenly from abroad, they have to vacate in a hurry. The pressure of finding housing leads them to a mansion outside New York City that is an amazing deal because the husband has just been extradited, and the old woman living there has to unload it in a hurry. When they move in, they find out that it needs a little more work than they’d been led to believe. Which leads them to having to deal with household disasters, contractors and their workers, and asking maestro for help. It tests the bonds of their relationship but ends well, of course–it’s a comedy.

The film is not as star-studded as The Burbs, but it does have Yakov Smirnoff in a small role, and the boys recognized Alexander Godunov from Die Hard.

You know, I am not sure that I’d seen this film all the way through before this time. I remember bits, probably from commercials on television when I was 12. What, fourteen? How do I remember things that recent?

At any rate, it’s amusing. Like The Burbs, it’s poking a bit of fun at the fixer upper house, the deal too good to be true, and dealing with contractors (whatever the question, whatever the job, it will be done in two weeks). However, in the intervening years, I suppose we’ve (I’ve) gotten a little sensitive to “What is this movie attacking?”

I started this film with both boys, but they both gave up before the midway point. Whether that’s a question of pacing, a question of adult concerns (home maintenance and improvement), or a question of whether they had pressing business on their important Internet games, I leave to you gentle reader.

However, the Internet has not made a debate about Carrie Fisher versus Shelley Long as your preferred dream partner, but I am here for you.

Speaking of characters, Carrie Fisher’s character in The Burbs is more steady, if somewhat doubtful of her husband’s instincts. But I think Shelley Long is prettier, Mizzou-supporting slave Leia included. So take that for what it’s worth. Which is “nothing,” which is what you paid for it. Coming soon: My Substack, where you can pay me $70 a year for twee “insights” like this. Or not. Never mind the Substack, I’m not here for the money. I’m here to look up when I last watched or read something. You’re here, gentle reader, because in the year 2368, after the apocalyptic armageddon war, you’re just an algorithm whirring away on a failing UAE satellite, trying to reproduce all human knowledge and beam it to long-dead colonies.