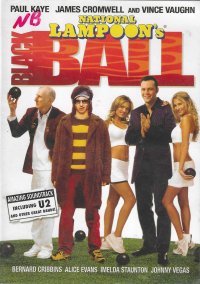 This film is labeled “National Lampoon’s,” but it was a British film and not an American film. So any connection to the National Lampoon franchises or brand is negligible, which is kind of unfortunate, as I was going to speculate on whether National Lampoon films were kind of lampooning films of certain genres with their entries in the field, but unfortunately, it would appear that they just rented out the name for the money. And not enough, as a (full disclosure) investor in National Lampoon Media Partners (NLMP) would tell you (because the investment has not panned out, but at least it was not a big of a loss in my portfolio as Salon).

Ah, where were we before I started thinking of my 25 years of investing, which has pretty much broken even?

All right, if you wanted to see a Happy Gilmore style movie, but instead dealing with bocce, I’m sorry, bowls (which is apparently the British spelling of bocce) instead of golf, this is the movie for you. Actually, it doesn’t have the Happy Gilmore story arc–this film follows more of the rock star arc where a humble man becomes famous, the fame goes to his head, but he redeems himself after alienating those most important to him.

A guy from the British projects plays bowls, a lawn game where you try to roll a ball close to a target ball, and you can knock the other team’s balls off away and into a gutter. So it’s remarkably like the bar game with the disks or even cornhole in that regard. He wants to play for the English team to take on the international stars, a pair of Australian brothers. So he gets to play in a local tournament/match/Ascot or whatever they call them in Britannia against the local reigning champion (played by James Cromwell, most recently notorious for a silly Starbucks hand-gluing) who has never aimed higher (to play for the national team, for example). He wins, but he writes a British bad word on his opponent’s scorecard, so he gets banned from the sport on a technicality. A splashy American agent (played by Vince Vaughn, not just phoning it in) convinces him to sign with him, and they make a splashy show out of bowls with the new Bad Boy of Bowls. Throw in an obligatory forbidden romance with the daughter of the local champion, a reconciliation of sorts, and a teaming of the two bowlers to face the Australian brothers (and a sudden death final point that looks an awful like Dodgeball), and finis!

Not a whole lot of laughs in it–to be honest, I liked it better when I was watching it and thinking it was an American film lampooning films like this and not the straight comedy it actually was.

But I am thinking about stopping by Academy Sports to pick up a set of bocce balls. Which would be interesting here at Nogglestead, as the ground slopes from north to south and has furrows from where water has run and where old fences stood. So it’s not likely to be the manicured greens of actual bocce courts.