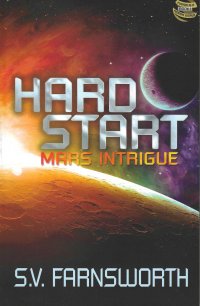 This is the best Mormons In Space Love Story I’ve ever read!

This book centers on a Martian secret agent, Cody Greene, who is on death row for not getting married by a certain age. He’s rescued by a beautiful engineer who herself was reaching the mandatory marriage age. But, as a twist, he is to investigate her for resource theft–specifically air stolen from one of the domes making up the different colonies on the planet. They’re married at first sight, and they find themselves attracted to one another, which gives the book the majority of its motion–will they give into their desires/love for each other, or will the secret agent continue to keep his new wife at arm’s length to investigate her? Also, Cody’s mother, from whom he is estranged, is a powerful politician/government official who might be pulling strings and manipulating him. Oh, and the new Mrs. Greene is a blonde, blue-eyed beauty, but she is half Korean and was raised in the Asian colony, so she tries very hard to look Korean and has a Korean mindset–spartan domicile, Korean cooking and dining, and so on.

So the book has a lot of interesting plot things going on, but it’s definitely weighted to the romance angle, which culminates rather disappointingly. The actual intrigue, presumably who is actually stealing the resources and who is pulling the strings behind the scenes, is kind of on the back burner to the “Do I give into my attraction?” and “I was about to give in, but now my suspicions are reset!” dithering. We get a couple of incidents and little to tie them together, and the book’s climax is more of a cliffhanger to the yet-unavailable second book in the series.

So it was a quick, light read, and for the most part, it worked, but a bit long on the dithering in the romance. Hopefully, the next book in the series will be better balanced in that regard–after all, the will they/won’t they Dave-and-Maddie tension (c’mon, you damn kids, that’s an allusion to Moonlighting, which was a television series in the 1980s) was resolved, so that dithering can’t be reproduced. And I’m looking forward to seeing how Farnsworth works in the other genres (fantasy and straight ahead romance).

If I can find the books; they’ve disappeared into the stacks, only to be rediscovered decades hence.