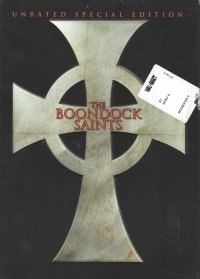 I became aware of this film sometime around the turn of the century when colleagues at work talked about it. One of them is of Irish heritage, so he probably felt some affinity for this film, which is a story of Irish brother vigilantes in Boston taking on various mobs in their amateur fashion while being pursued, and then aided, by an FBI agent played by Willem Dafoe. But then the local capo arranges the parole of an extreme hit man to track down and eliminate the boys.

The story is told in a variety of flashbacks and whatnot, where the police come to a crime scene, and the FBI guy figures out what happened, and then the film flashes back to the actual happening. Sometimes the agent is correct, but sometimes he just misses because the brothers are not as professional as he assumes.

For some reason, I’d gotten the impression that this was an ultraviolent production, but it’s really not that bad. Although I am not sure if that’s because it really isn’t that bad, or my impression of that bad has evolved over the last 20 years.

So, not a bad film. Not the touchstone for me as it was for my co-workers. And I’m not sure why they put the word Boondock in the title. The group calls themselves the Saints, but they aren’t out in the sticks–they’re in Boston. So, I dunno.

Normally, I would include pictures of an actress in the film, but the movie doesn’t really have any female leads. It does have Willem Defoe in a dress and make-up, but I will spare you that.