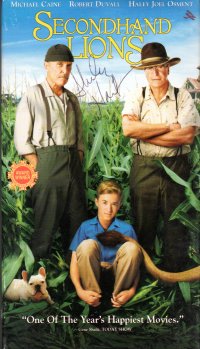 This film was one of the reasons I started accumulating VHS cassettes and DVDs. When I wanted to see this some time back, I could not find it on the streaming services at all nor was it at my local video store. I realized how captive I was to these services, and I’m the sort of guy who wants to watch what he wants to watch, not just to watch something and will pick something from what’s available.

So: It is a coming of age story set in the, what, 1950s? 1960s? The uncles fought in World War I. I think it’s the late fifties, which would have made the distant uncles almost sixty. Which is not that old, but would seem so from the perspective of a young man. At any rate, the son of a floozy gets dumped on the doorstep of the aforementioned uncles who live in a falling down house in Texas. The uncles are rumored to have a great stash of wealth on the property, and the mother thinks it would be nice if the boy ingratiated himself to the uncles and/or found the loot. The uncles are not sure what to do with him, but since he annoys the other gold-digging distant relations, they decide to keep him around.

The uncles had a previous hobby of shooting at the traveling salesmen who came onto their property having also heard the rumors of their wealth, but the boy convinces them to perhaps spend a little of that money, which leads them to some whimsical spending, including on a lion that they hope to hunt. Instead of a mankiller, though, they end up with an aging lioness retired from circus duty, which the boy then adopts and feeds.

When buying Purina Lion Chow, one of the uncles has a spell which puts him into the hospital, but he checks himself out. At a diner, they encounter four greasers whose behavior the uncle corrects, leading to them trying to brawl and knife him–but he wins against the four, even giving the knife-bearer advice on attacking with the knife and giving him the knife back to try again. He then disarms the kid again, and after beating them all, he invites them home for dinner, after which he will give them the Being a Man speech. Meanwhile, the other relations, disappointed to learn at the hospital that “He’s gone” did not mean “dead,” go to the uncles’ house, and the spoiled children release the lion accidentally, and it hides in the corn patch that the uncles, starting their life as retired gardeners, planted.

The boy follows one uncle to a secret room under the barn, where he espies a large amount of cash, some spilling out of bank bags. When the floozy returns with a man she describes as a private investigator, he tells a story that the uncles are bank robbers, so the boy should out with the loot’s location. When the boy remains loyal to the uncles, the “private detective” starts beating the boy, only to have the lion come and maul him. The floozy mom tries to take the boy away with the mauled man, but he tells her to leave him, and he does.

This is the first flashback: The story has a wrapper from a presentish day after the boy, now a man, receives a call that his uncles have died. So he is reliving the story of his raising.

The film has another flashback in the flashback, as one of the uncles tells him the story of their roving in Africa after World War I, his brother (the other uncle’s) romance with a pretty Northern African princess, and how they eventually came to steal her away from a prince–with several thousand pieces of the prince’s gold. This flashback is interwoven with the other and presents a story of how they got the money without bank robbery. At the very end, when the boy/man reviews the scene of their accident (at ninety-something, they tried to barnstorm through a barn in a biplane that they built from a kit thirty years before, they missed and hit the barn), a helicopter lands and a North African or Arab steps out–he had heard their names on the radio, and remembered stories his grandfather had told of the only men who had bested him–proving the story his uncle told was accurate.

So the film has many layers. It’s not only a coming-of-age story for the boy, but also a coming-of-a-certain-age story for the uncles who are getting middle aged and need to learn to enjoy that stage of life. So it’s got a message for young people, and a message for their parents. It’s PG, too. I watched it with my youngest, with my older boy popping in at the end to provide his sophisticated Twitch Stream Commentary. Which is unfortunate: He is at an age and mindset where he cannot take in experiences like films without feeling the need to offer his take on things, verbalizing twee things to debunk and denigrate the film as it plays. My youngest, my film buddy, has shown a little tendency towards this when his brother is around. Hopefully not too much.

Because this self-involved ironic stance is really taking a bit out of the shared cultural experience, a set of allusions and common metaphors that help bind a community.

Or maybe I’m just an old man kvetching, but I because I watched this film this week, I was able to catch the reference at At any rate, Wilder, Wealthy and Wise today:

How many firefighters will quit rather than get the jab? How many EMTs will simply walk away rather than submit to it? By my count, the number is not insignificant, and these are crucial jobs if you like keeping your house not burned up like and would like granny to get to the emergency room in some other fashion than you tossing her into the bed of the pickup after you move the Purina® Lion Chow™ out.

So much of this will go over my boys’ heads when they’re adults. Except nobody will make allusions like this in the future. The future will have all the depth of Idiocracy.