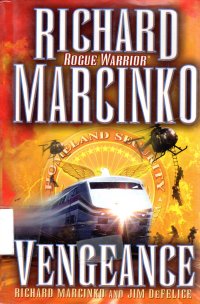 My review of Terra Nova: The Wars of Liberation mentioned Marcinko (mainly, how “sir” is pronounced “cur”). So when I spotted an actual Marcinko on the shelves, I picked it up.

The other Rogue Warrior novels I’ve read were Marcinko and John Weisman, and I noticed a marked difference in the books. This one is a little thinner on the depth; fewer asides, perhaps less research, more akin to a basic modern thriller or fat men’s adventure book than the previous books. So I didn’t like it as much for that reason.

In it, Marcinko and his group are doing some Red Cell work for the Department of Homeland Security. In the first set piece, they infiltrate a moving train containing dangerous chemicals, and although they do not harm it, they find someone else has set charges to blow it up. Someone from his past, who seems to know Marcinko and his M.O. very well, taunts him as he works on other Red Cell messages. Is it a former colleague? A well-funded terrorist group? Why not both? A couple more set pieces later in various locales, at the finale we find that it’s a sister and brother from Vietnam who’ve been told that Marcinko was responsible for their American father’s death, and they’ve lived their lives for revenge–and they’ve caught on with an actual terrorist group whose attack they will use as cover for their titular vengeance.

So it’s a bit, erm, twee. Even the Marcinkoness of the book is tuned down a bit. I was disappointed. It looks like I’ve read most of the Weisman collaborations already, and that the balance of the Rogue Warrior books are this new guy. Which might be part of the reason that I don’t find them in the wild at book sales. Although the greater reason is probably that I don’t generally look over the fiction sections at the larger Friends of the Springfield-Greene County Library sales.