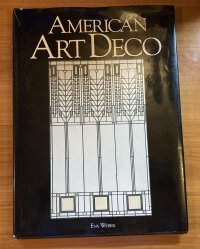 This is a large-sized Crescent book covering the design styles of art deco which were early 20th century design and architectural movements around the world, but notably the United States. I say styles and were in the plural because really Art Deco includes subdesign styles called the Aztec, zigzag, and streamlined styles. The book breaks things up into sections on Architecture, Furniture, Art, and whatnot. Each chapter has a page of text that name drops people who popularized the style, and then includes photos and illustrations.

You know, I like Art Deco, at least in the design and the architecture–we have some Fiestaware at Nogglestead–but not the art-art, which has a bit of Sovietism to it. A lot of it comes from the WPA and NRA programs coming out of the New Deal, so that’s probably appropriate.

However, Fiestaware aside, I like to look at it, but when it comes to design that I like to have around Nogglestead, I go more for classical looks and cheap pressboard. Not stylized modern things, or at least how modern was envisioned a hundred years ago. Even though it’s cooler than what a hundred years later would generally produce, particularly in architecture.

So that’s what comment you get from me in this regard. You want depth in discussion of design, go seek your Lileks and Driscoll.