You know, some weekends I come through on Monday morning wondering what I did and where the time went; generally, this follows a weekend of common tasks, chores, and work, where I get up-do a martial arts class-nap-work-chores-sleep-church-nap-chores. In the autumn and winter, Sunday afternoons are given over to football as well, so the time goes by and I seemingly have nothing to show for it.

This weekend, though, I can account for my time pretty easily–and still have little to show for it.

On Saturday, I slept in until about eight thirty. When I was younger, my waking hours tended toward the night, so I would stay up until midnight, one, or two in the morning, and I would sleep until ten o’clock. But having children has put me on a morning-based schedule, so when I get to sleep until eight, I take it. I slept until eight, and then I had some breakfast, and I puttered a bit with morning chores, and then I took my younger son down to Nixa so he could spend the day with a friend. On the way home, we (my beautiful wife and I) stopped at an estate sale over in Battlefield. You know, I used to hit estate sales every week in my Ebaying days, so I was a little inured to how somber it was to go through someone’s life’s leftovers, but now that I hit them only once every couple of months, and because I’m getting closer to that end for myself, I’m a little sad. But I picked up several videocassettes, including Secondhand Lions for which I was kinda looking, and some magazines for découpage projects.

After a nap, I replaced the belt and tension wheel on our dryer, which had taken to screaming like a banshee when drying laundry–which had made me reluctant to do laundry at all. The kit I bought had replacement drum support wheels as well, but I didn’t want to take the drum out completely. I was on a bit of a clock with afternoon plans, but I wanted to fix the dryer because we were going to need to run it later in the evening and perhaps after bedtime. When I started it up, it was quieter, but then the squeak returned. I didn’t have time to re-open the dryer and do it all over again, so that failed repair would have to linger until Sunday.

In the afternoon, I drove to Cole Camp to pick up the oldest son, who had gone out of town with a friend to visit the friend’s grandparents and fall festival in Cole Camp. It’s two hours to Cole Camp, and we picked up the youngest after we returned to the Springfield area, so all told I spent about six and a half hours in the car on Saturday ferrying children. On the plus side, I got Secondhand Lions, and the trip to a new town enabled me to get two new papers to subscribe to, the Buffalo Reflex and the Benton County Enterprise. Which means I’m going to have to get a bigger mailbox so Cora, our mail carrier, can fit all these papers in on Thursdays and Fridays.

On Sunday morning, we did the Springfield 9/11 Memorial Stair Climb. 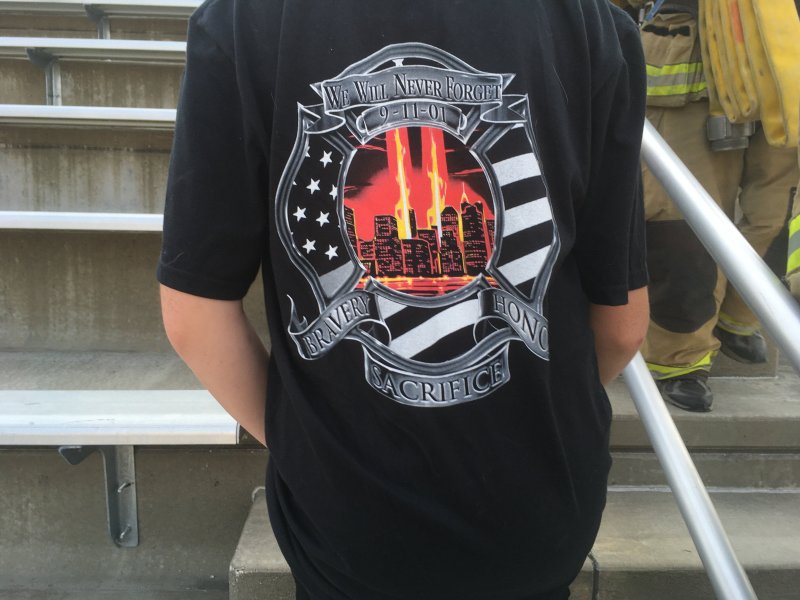 110 flights of stairs; it took us a little over an hour. I did it two years ago, and this year, I did it with the boys. I was a little concerned as I am two years older and have not been as active as I have in the past, but it was not too bad. The crowd was smaller than my previous experience, but it was still full of firefighters doing the climb with their full gear. It humbled me, and I pointed out to the boys that most of the people there would risk their lives to save yours without a thought to the danger. I felt a little like I was stealing some valor participating as a civilian. I’m not one to thank everyone for their service–frankly, I think that’s a middle class affectation more for the thanker than the thankee–but I do appreciate what those firefighters do.

After the climb, my youngest and I pulled apart the dryer, including removing the drum. We wrestled off the existing drum support wheels and tried to fit the new ones on. Either the wheels I received in the kit were the wrong parts, or a production defect made them a millimeter too thin, but the new wheels did not fit. So I cleaned some fabric–hair or lint wound tightly around the shafts–and added a little WD40 and hoped for the best. The boy, who likes to help with these sorts of thing when they go well grew frustrated, as the new little plastic clips were also tight to get onto the shafts. However, when we put it all together, it worked, quietly, and so far the dryer has not caught fire.

It was a good thing I did it before the nap; I told the boys that the climb was more of a workout than a 5K and more akin to a triathlon. After pizza and a nap, I was not good for much of anything. Fortunately, football season opened everywhere but the NFC North, so I got to read poetry whilst the Packers took a pasting.

So that’s what I did. Something close to nothing, but different from the weekend before.