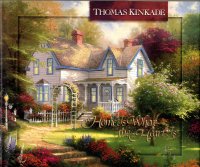 Not to be confused with Home Is Where The Quick Is which was a MOD Squad tie-in paperback that I read in 2012, proving that I have long had a thing for those kinds of books (my run through them this spring notwithstanding).

Instead, this is a Thomas Kinkade property. It’s 47 pages long. It has 18 Kinkade paintings reproduced; opposite pages have quotes from famous literary works. In it, Edward Guest has two or three such pages; as his most famous poem is called “Home” and the title comes from it, I understand why. Also, his works were known for being kitschy and sentimental and are mostly forgotten now–so you can see how he might fit in with Kinkade.

So I looked over the pictures here with a bit of a gimlet eye (not Gimlet’s eye, gentle reader; don’t be morbid) to try to see what some find so offensive about them. Well, it’s only la-di-dah public types who tend to get quoted disapproving Kinkade’s work. They’re homey scenes like something out of Currier and Ives, but, and I think this might be the start of the disapproval, the skies are usually fairly bright even at night–perhaps a nod to his Christian beliefs–and the light spills kind of unnaturally out of every window of the houses in the nighttime scenes, which seems wasteful at best and an anachronism if you try to figure out how the light was so bright and even though it’s horse-and-buggy days, probably precluding electric light for most of these places. Those would be some very bright gas lamps indeed. But, you know what, it’s also to emphasize the homey, so I get it.

It’s a shame about his tragic personal life, and it’s a shame people dunked on him when he was alive and probably after he died. Knocking him because he purportedly outlined things and had assistants fill them out or whatnot. C’mon, man, aren’t you familiar with Renaissance art practices?

At any rate, a nice little book that I could use in between chapters of other things.

I suppose I would be remiss in noting this is the first of the books that I read from this weekend’s binge. I was actually looking for a book of poetry, but when I shelved the books, I scattered the smaller books across the stacks in my offices, and this was the first quick browser that I came across. So it didn’t make it until football season.