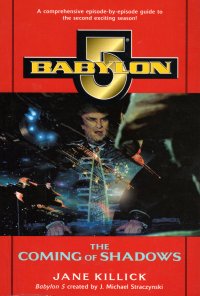 I have seen like five minutes of Babylon 5 in my life, and I’m buying a book tie-in? I blame it on book-acquisition-drunkeness.

In the fourteen years since, I have not seen any more Babylon 5. I thought back then that this was a tie-in novel, but, you know, looking at the cover indicates that this is an episode guide for the second season, apparently the one where The Scarecrow (Bruce Boxleitner) takes over from Sisko the other guy. The joke is on me, though, as I bought the episode guide for season one, Signs and Portents in an ABC Books order last year during the Great Empausening, as I could have read the first season’s episode guide before this one.

At any rate, the book is an episode guide that talks about the second season. There’s a new commander on the space station, and a couple of the races whose ambassadors reside on the station are gearing up for war–one race with the assistance of an ancient race that almost conquered the universe a long time ago. The book starts with an article on producing the series on a budget, and then the individual episodes have a cast list, a summary, and then the cast and crew talking about their memories of making the episode. As such, you don’t get a lot of intricate connections between the episodes, although it does mention the arc stories as they developed.

While reading, I was struck by the actors who played in Star Trek series and Babylon 5, including Walter Koenig and Dwight Schultz. I see Miguel A. Núñez, Jr., was a guest star in one episode this season; I saw his film Juwanna Mann in the theatre because I remembered him from Tour of Duty, and looking at his oevre, I see that I have seen him in a lot of movies, although I don’t remember him in them (they’re small roles), but undoubtedly I recognize him and say his name when I see him in those bit roles, only to forget he was in them if I happen to think of them.

At any rate, a couple quotes and remarks below the fold.

Clearly, someone is used to explaining for international audiences. In the intro essay, one of the production crew talks about making budget:

“We had to play what we call in American football ‘no-mistakes’ ball,'” says Kevin G. Cremin, who remained production manager for the first two years.

I, too, have used football metaphors in my professional writing which is read internationally, so I have to be clear. Most recently, this was in an article called The Number of Touches: Improving Software Quality by Actually Testing:

We See What You Did There

“Everyone has a vested interest in the show; their contribution is paramount, and I’ve always believed that this type of an enterprise is a communal enterprise, that the sum is greater than the individual units.

And Time Passes, As Does The Metaphor

“[He thinks] the Centauri are no good. We have to destroy them. How do we destroy them? Kill their leader. I mean really acting on passionate, patriotic motive. It would be like us deciding in the United States, okay, we’ve got to destroy [the Iraqi leader] Saddam [Hussein], not with missiles or anything, but the man: go for the man, and that leadership that’s causing all the problems will be gone–this sort of fundamental black-and-white thinking. That’s G’Kar’s thinking.”

Five years after this book was published, Saddam Hussein was captured in his spider-hole; he was killed before trial shortly thereafter. Which was seventeen years ago. So we’ve had the opportunity to rethink that. Also note it’s been ten years since Osama Bin Laden died.

I kind of miss the foreign bogey men. The new ones, police officers and, well, me, are not as fun.

At any rate, kind of interesting. I’m not hunting down the shows to watch them–I read books, and this year, books about movies and television–more than I watch movies or television. I’m already a week behind on watching Jeopardy! with Aaron Rogers in it, for example, and each episode of that takes like twenty minutes of viewing time. And I just asked for The Twilight Zone and That 80s Twilight Zone on DVD as a gift idea, so I don’t know when I will get to this. Unless, of course, I find a complete series of it at the library book sale this year on half-price day. I do remember, though, a friend at the time extolling its virtues because it was gritty in a way that Star Trek was not. The article in the beginning of this book makes clear some of the grittiness was because of the limited budget, which meant the show could not have the polish of the Paramount Enterprise.

Worth a couple hours if only for the curiosity. Not sure when I will get to the other episode guide I have on hand–perhaps when I find it.