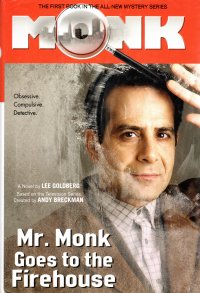 I don’t know where I picked this up; it’s a nice hardback edition, and it doesn’t have any price stickers or internal markings to indicate whether it came from a library book sale or ABC books. One of the mysteries of the universe, I guess.

The book is based on the television series Monk which ran the early part of the century. That makes it ten or twenty years younger than the other television- and movie-based properties I’ve been reading the last couple of months. This is the first in the series, which pleases me, as I also came across the paperback copy of Mr. Monk Goes To Hawaii that I bought in 2017, and I managed to grab the earlier one first (unlike the Babylon 5 episode guide I just read, which is for the second season but I’ve learned that I have the episode guide for the first season around here somewhere).

And I really enjoyed this book.

The schtick of the program is that Adrian Monk, the detective, is obsessive-compulsive and germaphobic, but his slightly warped mind is good for solving murders because he notices little details that other people overlook. The book is written in a first person narrator style where his assistant, a former bartender who keeps him in handiwipes and intercedes with normal people on his behalf, tells the story. So it has a Holmes/Watson structure, and it’s fun to read. And no politics; a lot of twenty-first century crime fiction, especially by established authors (Ed McBain, Robert B. Parker, Marcia Muller), has some jabs or worse at people who vote differently than the authors. You get nothing of the sort in this book, and it’s set in San Francisco.

My beautiful wife tells me she has read works by the author and some of his collaborations with Janet Evanovich and has enjoyed them; perhaps when I hit the Friends of the Springfield-Greene County Library book sale next week, I will actually walk past the fiction section and the mystery tables to see if I can spot some of his other works.

Which is not to say I did not find things to flag and quibble and snark over.

Out of Date Racial Terminology

An African-American woman in a bright blue SFFD windbreaker with the words ARSON INVESTIGATOR written in big yellow letters on the back examined the rubble in the far corner of what was left of the room.

Remember when it was bad to call people with dark skin black and one had to say African-American to be sensitive, which was a bit of a trap if the person with dark skin was Caribbean or African-African. My God, that seems like so long ago.

Also, looking at the writing style, which is informed by television writing but not dominated by it (no Parkerian hundreds of pages of snappy dialog–instead, some dialog and fast-paced prose-prose), I find a kindred spirit. That single sample sentence has a subject noun with an adjective (African-American), a verb, and a direct object with no simple adjective, and seven prepositional phrases. I wondered if I was using too many–I think I do for the rhythm–but apparently not!

She gave Monk a hug and went back to her room to IM her friends.

I dunno if AOL eventually won some sort of patent/copyright on the term, but everyone now DMs people. In my fiction, I try to keep it simple and message.

“Can we make this quick? Jeopardy [sic] is on,” Gregorio said.

Although we’re currently in the Anderson Cooper guest hosting stint, so I’m not watching it. I’m avoiding all the newsreaders’ and talk show personalities. I want to see people whom I can trust and whom I can imagine is as smart as me hosting it.

We left the restaurant and walked aimlessly around Chinatown for a while, then stopped at City Lights Bookstore at Broadway and Columbus to browse.

I’ve been to City Lights Bookstore. As a matter of fact, I’ve been to San Francisco (the first time reviewed here).

Mrs. Throphamner’s dentures were on a napkin on the coffee table, facing the TV so they, too, could enjoy Diagnosis Murder.

Jeez, I forgot about that long-running show that my sainted mother loved. Greenberg was a writer and executive producer on that show.

You know, circa 2006, I was still testing Web sites through AOL. Although I would give up my testing AOL account when I moved into the digital interactive agency’s office, I still tested in the AOL Web browser. Which was a thing, when we were young. Or just younger.

Incongruous
The first person narrator, the assistant, explains how she got started with Monk:

“Someone broke into my house late one night. I walked in on him and he tried to kill me. I killed him instead. The police couldn’t figure out why the intruder was in the house, so they called in Mr. Monk to help them investigate.”

But later, she says:

Before I met Monk I managed to go through my life without ever seeing a dead body, without seeing people who’d been shot, stabbed, strangled, beaten, poisoned, dismembered, run over, or clobbered with a brick.

Except that one time.

Wait Until The Glorious Future Arrives

“People spit on the sidewalks,” Monk said. “Dogs urinate on them. This scratch could be fatal.”

I am from the future, and I have bad news about the state of San Francisco sidewalks a decade and a half hence.

At any rate, I liked the book a lot and have already queued up the second for when I finish David Copperfield finally, which could be this week.