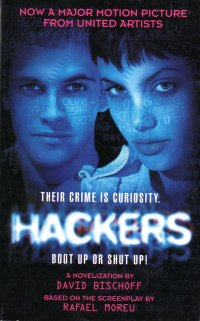 You know, I am pretty sure I saw this film sometime in the early part of the century on videocassette or DVD, but I don’t remember it that much. I watched a lot of these hacker movies around that time when I was writing John Donnelly’s Gold, and I meant to throw in a lot of allusions to hacker movies. I don’t think I included one from this movie in the novel, and I kind of confused it with Antitrust even as I started reading this. And, maybe sometimes Sneakers when just thinking of the title.

In it, a young man who was convicted as a juvenile for releasing a virus in 1988, turns 18 and can use a computer again. He and his single mother have moved from Seattle to New York City, and he is starting at a magnet school for smart kids where he finds a group of hackers. One of them, a lesser light trying to prove himself, hacks into a mining company’s computer and finds a salami attack in place where the head of security and the head of marketing are embezzling small amounts of money a lot of times. So they frame the kid/kids for a computer-based terrorist attack on one of the company’s oil tankers, and the hackers have to unite to clear the protagonists and expose the plot. Along the way, we get school pranks, young love, high school party/rave scenes circa 1995, and parental worry about what the boy is becoming.

I flagged a bunch of silly little inaccuracies, like arming the Secret Service strike team with AK-47s, saying BBS is short for Bulletin Board Service (it’s system, you damn kids), 1995-era teen hackers knowing Pascal, calling a wardialer a “WarGames” scanner, you get things like “It isn’t a virus! It’s a worm!” (which I guess it was, but still, in the 21st century we worry more about trojan horses, ainna?), and whatnot. I flagged them like it was worth mentioning, but the person writing the novel might have had less knowledge about contemporary technology than the screenwriters–some of the inaccuracies come in the non-dialog text. It’s been a while since I saw the film, as I said, so I don’t know.

You get some very dated technology with a “Pentaflex” (someone didn’t pony up for product placement) computer chip running at 30MHz. You get apocryphoral scenes like one at the World Trade Center. But you do get a shout-out to 2600: The Hacker Quarterly (which might have been filmed, so the author of this novelization was not responsible for it). You get unfortunate instances of pineapple on pizza–c’mon, man, that couldn’t have been filmed that way, could it? You get hacker speeches where they talk about freed information, wanting to learn, and being free. You get what looks to be an actual social security number (and some )

So, basically, it’s a teenager movie about hacking, with the focus on the teen themes and some pre-AOL level cinematic hacking for the plot.

I mentioned the virus release in 1988: This was based on the Morris worm. I remember that incident very acutely because at that very moment I was writing a research paper for my high school composition class, and I had picked computer viruses as the topic. I was in a tight spot, though, as the sources at the local library (magazines and books) that one could find on viruses were pretty thin. My mother drove me forty five minutes to the nearest St. Louis County Library branch twice. The first time, the branch had nothing I could use, and I could not request ILL books since I was not a St. Louis County resident (and back in those days, computers weren’t used much for card catalogs, so finding an ILL book would have been a challenge). However, the second time was after the release of the Morris worm, and I had suddenly lots of sources since every news magazine ran a story about virii and worms with sidebars I could quote).