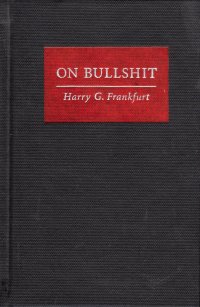 This is an essay by a philosophy professor emeritus at Princeton, published in hardback by Princeton University Press. I don’t know where I got it; I only know I picked it up as a break between movie novels because it’s pretty short.

Within, the author talks about the difference between lying and bullshit, and the basic crux of the article is that the liar knows he’s lying and subverts truth whereas the bullshitter doesn’t care whether what he’s saying is true or not. It contains lots of philosophical speak like talking about the truth-value of a statement and referring to Wittgenstein (whose progeny call themselves WittgenSTEEN), and the author digresses into how bullshit relates to humbug and whether bullshit has any nutritive value.

I think his definition of bullshit conflates two things that bullshit tends to mean in real life. Bullshit is generally puffing up or marketing kind of talk that is at its heart false, and the person spreading it might or might not know it. I think this author finds bullshit to be worse than lying, but when it’s just marketing or puffing, it’s actually less offensive and wrong. Unfortunately, in some cases, it does cross the line into outright lying. The subtle difference makes all the difference. How to capture into words the distinction, though, is the challenge, and this book really doesn’t go into it.

So, basically, it’s kind of an insipid bit of modern philosophy. Instead of tackling the weighty questions of existence, we have a little pop culture book with a catchy name that does a little of philosophy and refers to some other philosophers. Perhaps the authors of such books (which includes The Simpsons and Philosophy which I started three or four years ago and still languishes on my chairside table) want to introduce philosophy to the masses by roping it into pop culture and hope it will spur the people on to read primary sources. I think it’s probably as useful as feeding kids books full of crude drawings like the works of Dav Pilkey and Jeff Kinney in hopes it will lead children to reading real books–take it from me, as hard as I try, my junior high and high school students still read the Captain Underpants and Diary of a Wimpy Kid books over and over again instead of something more mature. Or maybe the authors want to make a buck.

Regardless, I did flag some quibbles with the book, but I’m not going to bother to go into them. Probably not worth my time.

After a slight detour, it’s back to David Copperfield and movie books.