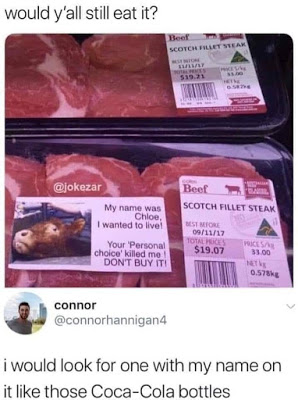 You know who is bothered by knowing the name of a cow? A soft city person. Which is not to say that I’m a Hank Williams, Jr., certified country boy, but I do read Ozarks Farm and Neighbor magazine, and I know where beef comes from. But most ranchers have too many cattle to name individually anyway.

When I was a bagger, ahem utility clerk (which pays better than a bagger, but only because minimum wage had gone up), the Shop Rite where I worked tagged itself as the Best Meat in Town, and every year, the owner would buy the best blue ribbon award-winning cattle from the state fair (the Wisconsin State Fair is held in Milwaukee, just across town), and they would butcher the meat in-store and sell it.

So, yeah, every year around September, I knew the names of the steaks and hamburger coming down the conveyor belt. And I am pretty sure I had my portion of Outlaw, the winner one year. And that’s when I was a city boy, before I thought I might become a hobby farmist. Before I almost convinced my beautiful wife that we could raise a couple cattle, since normal people down here do that. Before someone she worked with told her that she (my beautiful wife) would never be able to kill an animal she had looked in the eyes (come on, we send it “to go live on a farm in the country” for that). It’s not like we have to bang Little Nell (the cattle would have literary names, of course, like the cats) with a hammer and process the meat ourselves.