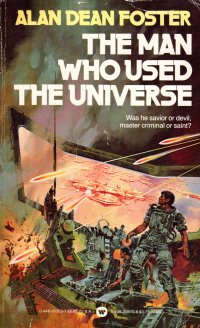 Alan Dean Foster might well be the greatest living science fiction writer. There, I said it. At the very least, I have enjoyed his work ever since I got a book in the Spellsinger series in middle school.

Since then, I’ve read and reported on:

At any rate, I have reached the point in Wuthering Heights where I want to read something else after a couple of chapters of that Literature, so this was just the thing.

In it, a low-level thief kills a jewelry store owner who won’t pay protection to the local crime boss and then kills the crime boss’s killers who come for him because he’s… different. So he works his way up the levels, and that is numbered levels, of being an illegal, and when some of the political powerbrokers on Terra take an interest in him, he pulls a trick to become legal businessman, again starting at a low level number and working his way up. He makes an alliance, essentially becoming a spy for an alien race but seems to play both humanity and the aliens off of each other until a grander scheme comes to fruition–allying the humans and these aliens against a menace from the galactic core.

The first half of the book focuses on the main character himself and deals with how he goes about what he’s doing; the second shifts to a psychologist of the alien race who suspects the main character has some sort of plot going against his race and tries to thwart him–all the while playing into his hands. The book ends with a short resolution where these antagonists talk it over and discover that the main character does all his plotting, including his latest, a mocked-up alien armada that looks as though it is about to invade the combined spaces of the humans and their new allies–he does all this just because he does not want anything to have control over him. Also, the improved commercial environment makes the humans, their new friends, and the man himself richer.

So ultimately, it’s a little thin, but it’s a roaring read. I thought the ultimate twist would be that it was some sort of video game, what with the marking levels playing so much of a part early. That was not the case, though. But a fun read, interesting characters–the main character is an amoral, pragmatic man much like say Raymond Reddington in the television series The Blacklist or similar anti-heroes that abound here in the 21st century. It seems a bit ahead of its time, but I am sure one could find other examples of it in other works preceding this one.

2 thoughts on “Book Report: The Man Who Used The Universe by Alan Dean Foster (1983)”