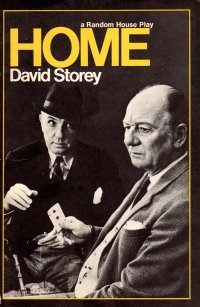 I hit my bookshelves looking for a Christmas novel to put me into the mood for the holidays, and I did not find one. Instead, I found this play by a playwright whose name I didn’t recognize. Of course, whilst I was reading it, I spoke of it with my beautiful wife, and we got to naming modernish–that is, twentieth century, playwrights. She could only name, sort of, Alan Ayckbourn, “The Norman Conquests” guy, and Neil Simon. I could name a couple more, being a reader of twentieth century drama, but not this fellow, so I thought he must have been pretty obscure. Although “pretty obscure” does not generally get a Random House hardback and Book Club Edition.

David Storey was something in Britain in the 1960s and 1970s. The son of a coal miner, Storey was a professional rugby player for a bit before turning to painting, novels (his first won a prestigious award and was adapted for the screen in 1963). Then he turned to plays. At the bottom of his Wikipedia entry, you find references to several textbook type academic works covering his plays, mostly, so some university (or maybe several) must have mentioned him in class at some time or another. This particular play opened in London and then ran on Broadway for a while. It was even revived for a run several times in this century (and has its own Wikipedia article). So he was not obscure–I just hadn’t heard about him.

Sadly, that’s a more interesting story than this particular play. It starts off with two men taking a seat and talking, which makes it a bit more difficult in reading than watching, as they don’t have too much distinction on the page or in what they’re saying. They’re passing time, not working toward a goal or problem. So I thought it was a bit Waiting for Godotish, and sometime toward the middle of the first act, I realized they were in prison or something. Spoiler alert: They’re in an insane asylum. In the second act, another man character is introduced who comes in and picks up the table and chairs at various times, and a couple of women characters, one of whom is round-heeled, I guess, and they… talk. About nothing, really, and then the play ends with no real resolution.

So I didn’t like it that much, but to be honest, I am coming to sense that I don’t like too many plays that I read cold; I guess I am more charitable to them when I see them on stage, but even then it’s about fifty-fifty. The ones I like, I really like, and most of the rest are kind of meh.

One thing, though: Look at the book cover. Now, understand that the play describes one of the characters as a middle-aged man in his forties. Brothers and sisters, I am older than that (what? when?). Why do the people on the cover look older than that? Is it because they’re English, and Americans tend to look younger than Europeans? Is it because in the fifty years since, people have taken to looking younger? Both of these? Is it because the directors chose actors who were older than the play text stated? All of these? Or worse: I do kind of look like that? Sadly, and fortunately, that’s what I see of myself reflected in this book–and not someone in an asylum.