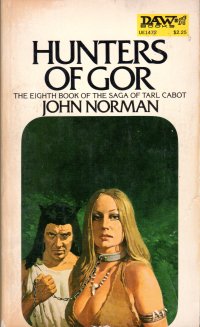 As I mentioned, I last read a Gor book in in 2014. I’m not saying it’s old, gentle reader, but then-frequent commenter John Farrier and now-frequent commenter Friar overlapped. Wow. Friar is moving into nomination to the MfBJN Commenter Longevity Hall Of Fame, second only to Charles Hill (PBUH). Higher than my own sainted mother who passed away when this blog was but six years old. Rob K. and Gimlet could unseat him, but they don’t comment that frequently. But that’s neither here nor there, but it’s probably more interesting to think about than this book.

After the previous seven-year hiatus from the Gor books, and I said:

So I was disappointed with this book, and I’ve got at least three remaining on my shelves. I might pick up another one soon–before 2021, I would hope.

So that became a twee goal of Brian J. If it weren’t for twee goals, I would have no goals at all. With a month to spare, I picked this volume up and….

I was disappointed with Captive of Gor because it was not a Tarl Cabot story; instead, it focused on a woman who was not a very likeable character who had some chances for redemption, perhaps (sorry, I read it seven years ago and cannot be remember exactly), but she chose poorly instead each time that option came around. I have mentioned before (see also book reports for Vienna Days, 2007, and Clemmie, 2010) that I really end up disliking books with unredeemable protagonists who just make their lives worse through poor decisions after some success (shut up, Ted!). Which might have carried over, but the degradation of women in the book was a part of it, too, perhaps.

This book is about 60% explaining slavery on Gor and treating women slaves poorly (although the male slaves do not fare well, either). The female slaves crave the domination, and they’re happy in their servitude when they give into it. Which is a bit of an extreme presentation of traditional roles of the sexes, but, eesh. Not so much. Perhaps liberals think the newest Supreme Court justice is into this. But probably not.

The other 40% is a pulp story of Tarl Cabot going into the untamed forests in the north of the Gorean continent to find his True Love from the early books (I mention in my report on The Priest-Kings of Gor, 2006, that I did not read the series in order, my memory of the saga is soggy). He has lost the home stone of Ko-Ro-Ba and has been cast out of Ar and is now a merchant in Port Kar. To be honest, I didn’t remember much of the continuing saga as I went along, so some of the reminisces and probably foreshadowing (the assassin probably lives, and I’ll probably read about him in the next volume, someday). But he has heard that the wild women, the Panther Girls, of the forest have her, so he sets up an expedition with a galley and some trusted people to go looking for her. The leader of the city-state whom formerly employed Tarl, the leader of Ar, is also looking for his daughter in the north forests. Tarl dreams of finding the daughter first, triumphing, and elevating himself to the highest levels of Gorean aristocracy, and the book repeats this a bunch. I thought perhaps it was setting itself up for some counter-narrative when Cabot himself gets captured as a slave, but, no. After a series of set pieces and reversals and betrayals, Cabot alone hunts his enemies who have taken the leader of Ar and his retinue slaves and are headed to their exfil point but Cabot hunts them down. At the end of the book, a bunch of slaves are manumitted, but many of the women return immediately to slavery at the hands of their beloved former masters. And Tarl returns as the Bosk of Port Kar, leading into another book which I will likely read before another seven years pass. If only because I set another alarm.

At any rate, the book moved all right, although perhaps that’s because I was skimming a bit.

But one thing stuck out, and I flagged it:

In hunting, one often fells the last of the attackers first, and then the second of the attackers, and so on. In this fashion, the easiest hits are saver for last, when there is less danger of losing a kill. Further, the lead animals are then unaware that others have fallen behind them. They are less aware of their danger. They regard as misses what may, in actuality, be hits on others, unknown to them.

I flagged it because Gary Cooper tells his barracksmates that this is the way to kill turkeys in Sergeant York.

So if I have learned anything this month, it’s how to kill a line of turkeys or Gorean slavers on the march.