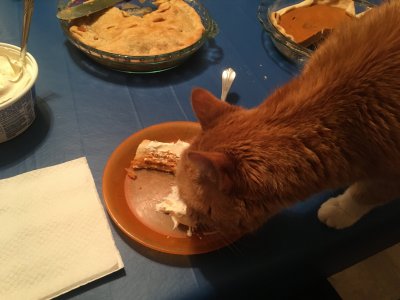 It was just the four of us this year. Five, if you count Roark, who was very brazen in his turkey hunting this year.

Now, some of the regularly scheduled holiday soul-searching below the fold.

I often spend time looking back to the holidays of my youth; as the son of one of five and one of four whose stepmother was one of five, holiday gatherings always include grandparents, a great-grandparent, lots of aunts and uncles, and sometimes cousins. Counting youth to my college years, I had a lot of younger cousins on the fecund paternal side. Since I’ve spent all of my holidays since 1993 with my dwindling maternal side (only 1 of 4 remains and two cousins and one cousin-once-removed) or since 2009 with my mother-in-law and nuclear family, the holidays have tended to be smaller affairs now. Yesterday, I thought that perhaps what I really wanted was the safety of taking everyone for granted–my relatives were there, again, and they would always be there.

I spent much of yesterday at my computer, banging out blog posts and whatnot. My boys spent the entirety of the day on their devices, video games, and YouTube. So, essentially, I took them for granted now, and this quite likely will be a great Thanksgiving I long to experience again sometime in the future, and I could have done it better.

So I finished the evening watching a movie with the boys. Not a Thanksgiving movie, mind you; unlike Ben-Hur, which we happened to watch on Easter.

I have a whole long weekend and a couple of days to spend with the boys; hopefully I will spend some time with them. Sometimes, this blog is one long slog of I could do this life thing better with varying degrees of success. Hopefully I will have some success to report this holiday season.