So on Saturday, we had our discussion triggered by the Billy Joel hit “We Didn’t Start The Fire” as we tried to give them a concise history of troubles in Asia in the 20th century as well as boxers Billy Joel followed as a youth.

We got to the lines:

And I told them about the film, briefly.

When it came time to watch a movie on Sunday, I found I have a two-videocassette set in its original cellophane wrapper. As it’s a three hour and forty-five minute movie, I guessed rightly that there would never be a time when I wanted to see the film more acutely than then, when we could watch part of it after church and then another part of it after chores. 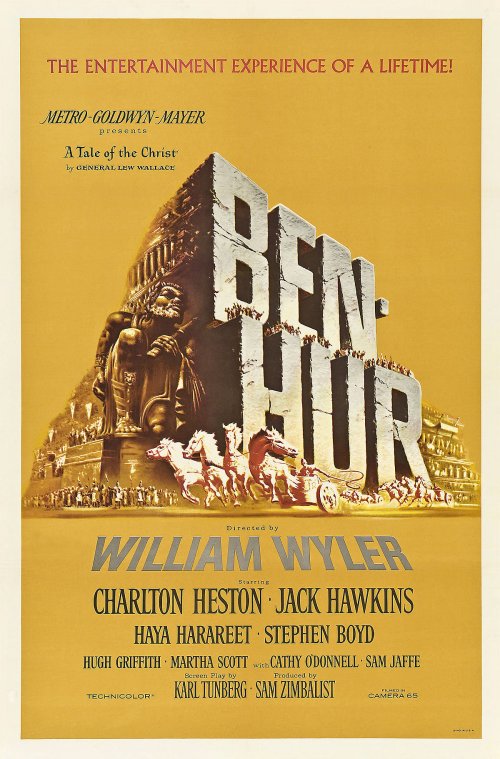 I’m sure I knew at some point that it was subtitled “A Tale of the Christ”–I think I had a copy of the book pass through my hands in my eBaying days, but as it started with the birth of Jesus, I apologized to my children that it was apparently a Christmas movie instead of an Easter movie. However, the film ends on Good Friday, so it’s a Holy Week movie.

I called it on Facebook “uplifting Easter story of bloody vengeance,” sort of Gladiator but with Jesus, but that’s a little oversimplification, of course. But you can see how the former had its roots in Ben-Hur. Which must have been quite the spectacle in the cinema in 1959.

It was enough to keep my boys pretty rapt in it over both parts. Which is either a testament to the story or the big budget (for 1959) special effects.

One of my boys has a shorter attention span than the other, especially when it comes to old movies. He’s prone to wander in and out and then ask what’s going on instead of, you know, watching. The younger, though, will sit through almost anything with his father, such as National Velvet. Since my beautiful wife only tolerates old movies with me occasionally, I think I’ve found an old movie buddy to watch the to-view shelves at Nogglestead.

Come on, you had to know I have to-view shelves of VHSes and DVDs at Nogglestead that differ from the viewed shelves, ainna?