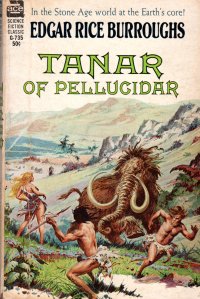 I was looking for something to read, so I picked up this Tarzan book that has been floating around the outer ranks on the to-read shelves in my office for a while now. I mean after all, I just read a couple of Tarzan books, didn’t I? Well, no–I read Tarzan of the Apes and The Return of Tarzan in 2009. They would have been some of the last books I read in Old Trees before we moved down to southwest Missouri. I can’t believe it’s been that long, but look at the comments by Deb, a frequent commenter in those days when the blog was only six years old. In my defense, I did “just” read some of the John Carter books in late 2017, so it was more “just” than eleven years ago.

And closer review of the cover indicates that this is not a Tarzan book at all; it’s the third book in the hollow Earth series set in Pellucidar with the main character of Tanar (completely different from Tarzan who appears in the fourth book in the series, Tarzan in Pellucidar). I guess the first two books deal with men from the outer world who find themselves in the hollow world which contains dinosaurs, primitive men, and intelligent lizard men who rule them using ape-men as muscle. So I gather from research reading the Wikipedia article.

This book starts en media res: Seafaring raiders known as Korsars attack the Empire of Pellucidar, set up by the outer earth men in the first two books, and take prisoners, including Tanar; the emperor himself sets out in a small boat to rescue Tanar. Tanar meets a haughty but attractive young woman aboard the pirates’ ship; she is the assumed daughter of the pirate leader by a woman captured on a small island of loving people. After a storm, which is almost unheard of on the seas of the hollow world, Tanar and the woman are shipwrecked on what turns out to be her ancestors’ island. There, they are met with suspicion but eventually are adopted by Stellara, the woman’s, father. Subplots ensue, a pirate who wanted Stellara for himself returns, Tanar ends up thought dead, but he’s really in caves of the Morlocks Coripies, underground dwellers. He escapes with the resident of a nearby island of hate, where the residents hate an berate their family members–this fellow kidnaps Stellara, and Tanar goes to the rescue. He gets captured by the Korsars a couple more times, subplots ensue, and he links up with the Emperor and they eventually back to their homeland.

The book also has a frame story where Edgar Rice Burroughs is talking to a friend who is into the new fangled radio, but who discovers a wave that travels through the Earth–and it’s through a broadcast on this wave that this story is transmitted to the outside world. So the guy with the radio plans to go to Pellucidar to rescue the men from the outer world who are trapped there. Which leads, according to Wikipedia, to the Tarzan book. This book came fourteen years after the preceding one in the series; they came a little faster after that, but the series was never as popular as Tarzan or John Carter series and the length of the series reflects that. Burroughs wrote a lot, but he wrote a lot more of what was popular.

I don’t think I have a lot more Burroughs floating around, but do you know what I pass over from time to time? One or more of the remaining Gor books I have. So maybe I will pick up one of them sooner rather than later. If only to address this comment I made when I read Captive of Gor in 2014:

So I was disappointed with this book, and I’ve got at least three remaining on my shelves. I might pick up another one soon–before 2021, I would hope.

With a little dilligence, I can make that goal!