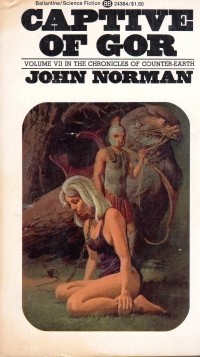 After I finished The Coming of Conan the Cimmerian, it felt the right time to delve back into the Gor series. I was taken a bit aback how long it’s been since I read the previous book in the series–I read Raiders of Gor in October 2007.

This book, though, was a bad place to resume. It’s not a Tarl Cabot story. Instead, it’s one of the one-off stories featuring a woman on Gor. The first, actually. It deals with a spoiled high society girl from Manhattan who’s taken to Gor to be a slave. And so she does.

The basic story arc is that the ship in which she is a passenger is shot down; she’s found by a slaver, trained to be a slave, gets rescued by some Forest Girls who are like Amazons, except they’re really just ‘liberating her’ to sell her to someone; she’s delivered to that someone in a building in the woods, but she escapes from that to be recaptured by guards of her original slaver. She’s sold and sold again, finally becoming the property and lover of a leader of a town, but he sells her, and she goes from owner to owner until getting pressured into an attempt on a merchant’s life.

That’s the high view. The details and bulk of the book are in the politics of the slaves, how this character is a weak liar, thief, and betrayer of other slaves. She’s never really redeemed in any fashion except (perhaps according to the ideology of the book) that she becomes a perfect slave.

There are hints and foreshadowing that she’s been chosen to be part of something, so I’d hoped that would come out at some point, but ultimately, it gets related very hurriedly in the last chapter, where she’s part of an assassination plot. At that point, things foreshadowed and hinted at are dumped into a couple of paragraphs, and it resolves kinda poorly.

So I was disappointed with this book, and I’ve got at least three remaining on my shelves. I might pick up another one soon–before 2021, I would hope. You can see a little bit as the series progresses, or at least I can looking back to my reports of the books, as to how Tarl Cabot gets to do a lot of different things like Conan did. He’s a pirate, he’s a warrior, he’s a slave. Norman really owed those old pulp books a debt, and he repays them pretty well.

Just not in this book.