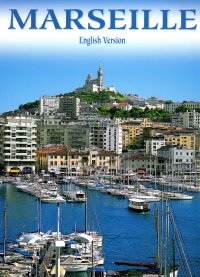 Well, this is a relatively recent travel book. Most of the time, I find these old travel books are from the 1960s or the 1980s, but someone who went to France in this century brought this back, and this person or the heirs sold it to Calvin’s Books for me to pick up earlier this year.

At any rate, this book is a lovely collection of photographs of the French city grouped by neighborhood or local landmark. Introductory text gives a high-level history of the city from its founding as a Greek colony, its role in holding out against Caesar (as depicted in Last Seen in Massilia. which is an old name for the colony), its stalwart independence through the Middle Ages, and its relatively recent joining into France. Of course, we get to hear about the creation of the fortress on the Isle d’If (immortalized, as this book acknowledges, in The Count of Monte Cristo). So the book has many pictures where this island is in the background.

The pictures are wonderful, and the description of the city does it credit.

I’m not sure I’m inclined to go, though. As I said to my beautiful wife, “I don’t need to go; I’ve seen the pictures.” And although I am a bit of a homebody, if we end up wildly wealthy, she will probably convince me to cross an ocean at some point. But England is higher on the list; perhaps the Cotswolds since I not only liked The Cotsolds, and I have another picture book of that region that I bought at Calvin’s Books that I will pick up this weekend or next.

Yes, I am “watching” footbal, which is really a pretext for “reading books during the day.” I set myself up pretty well between this trip to Calvin’s books for travel books and the visit to the Friends of the Library Book Sale for art monographs. I might make it to mid-season before I have to scour my to-read shelves for eligible books.