I’m inundated on my Facebook feed with celebrities holding up t-shirts or wallhangings, and I think, Okay, they’re just holding up a t-shirt, probably a green one that the novelty-pushers then edit their particular ware onto it.

Lately, though, I’ve been convinced that the celebrities are not holding anything up at all, and they’re just grafting either the head or the hard and body onto green screens.

What did it was a rapid set of songs on wallhangings. 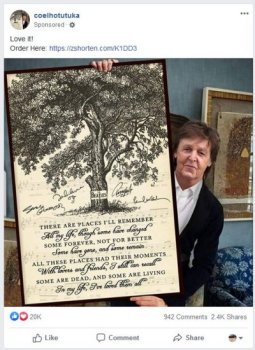 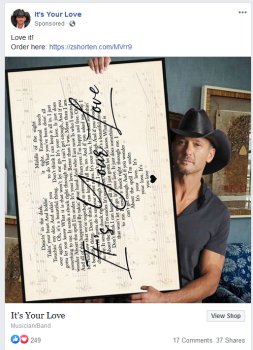 I mean, at least they altered the hands a little bit, but what are the odds that they’re holding the wallhangings in exactly the same fashion? Not likely. And Tim McGraw and Paul McCartney certainly did not hold these cheap, probably unlicensed, bits of decor at all. They probably don’t even know about it.

What? Stuff you see on the Internet is fake? Perish the thought.

I have never actually bought any t-shirts held by celebrity doppelgangers, so really it’s just more fodder for my foolish comment.