So a cousin of mine shared a Facebook video called Which ZOOM Caller Are You?, one of which is “The one in front of a bookcase”:

To be honest, I’m actually more of the kind that will avoid including video on these calls. In the past, when the team I was on actually had video calls, I had a slow Internet connection, so I didn’t want to tax it. Now, if possible, I try to avoid it because, if it’s a group call, you end up with tiny boxes which kind of subverts the point. And if I have to, I’ll do a video call, but I end up spending the whole time looking at the camera and not the screen, so it does me no good at all as I cannot but glance at the person with whom I’m speaking.

Which is not to say I don’t look at the video on the Zoom calls. When my current employer had a company-wide meeting a couple weeks back, I completely spent the call scrolling through the hundreds of people looking to see who would have more books in the background than I would (if I shared video). A couple people had a bookshelf or two, and my immediate manager might have been close with a wall of books.

I commented on my cousin’s post with a photo I did for a bit on another blog about framing your video so the bookshelves show but the bladed weapons do not: 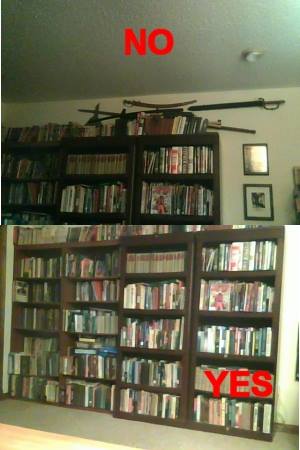 To which her sister responded:

Quit showing off all your wealth Brian! Not all of us can have the huge riches that you keep throwing in our faces. All I have is a plain wall

Because, gentle reader, I worry that I’ll have forgotten where I come from or that people, generally people I knew when I was younger, will think so. I mean, don’t get me wrong, I won’t let you, gentle reader, forget that I come from down a gravel road via the trailer park and city housing projects. I’m like Everclear without a recording contract and, face it, any musical talent whatsoever.

When I was younger, I was sometimes told that I was arrogant and a bit of a show-off, as I was always ready to tell you I got good grades or was really smart.

I like to think I’ve gotten better about it, especially in person, where I won’t even tell you I’m any good at anything at all.

But here on this blog, and probably on Facebook, I am prone to putting a good face on things. I mention I get a lot of books and some number of CDs. I’ve mentioned some periods where I’ve spent dollars a day on trivial things. I have a gym membership and a martial arts school membership. My boys go to private school. I drive a Lexus (albeit a twelve-year-old Lexus we bought with 100,000 miles on it). So, yeah, we’re doing okay, and I somehow have bumbled into a career that isn’t as satisfying as being a best-selling novelist but that leaves me not exhausted and physically not beaten down at the end of the day.

So am I flaunting wealth? I don’t know. I don’t think so. I hope not. But I would have to leave that for you, gentle reader, and for my cousin to assess. I’m not out here trying to be as artificial as an Instagram model but with a dad bod and flabbier prose. I’m just tapping out bits of my story, mostly for myself in a decade when I’m looking back at 2020. (I hope you like some of it.)

Maybe my cousin was just referring to my posting lots of pictures of books, which is what she meant by wealth. Maybe I’m reading too much into it. But I got a blog post out of it, anyway.

1 thought on “She Hit Me Right In The Fissure”