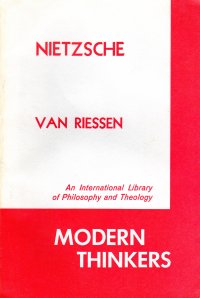 If you read only one 1973 European Presbyterian summary survey / critique of the work of Friedrich Nietzsche this year, well, it’s probably this one.

Actually, I don’t know if van Riessen is actually Presbyterian (the publishing house is Presbyterian and Reformed Publishing), but he is a European Calvinist of some stripe, so as you can imagine, socialism is praised. As long as it’s democratic.

At any rate, this book explores a little of Nietzsche’s biography and then runs through his written work. van Riessen identifies an evolution in Nietzsche’s thought as he goes through rationalism, positivism, and pragmatism on his way to what he (Nietzsche) hopes is active nihilism.

From time to time, the book contrasts Nietzsche with Christian thought, but the Christian lines of thought are just presented briefly without much detail, so this guidebook probably works best if you’re already steeped in Reform theology. The author also presents Nietzsche as struggling with Christ and his message personally in a way that I’m not sure I would infer, but I have not read all that much of Nietzsche primary sources much less in the original German. So I’ll have to accept this with a raised eyebrow.

So it’s a pretty good summation of Nietzsche from the perspective of a mid-twentieth century academic philosopher and theologian. More approachable than primary source Tillich or whatnot, but, again, it’s an explanation and not the primary source.

I don’t have any other titles from this An International Library of Philosophy and Theology Modern Thinkers line, and they’re not necessarily something I’ll seek out as this volume is a pamphletesque paperback whose spine from time to time made sounds like it was going to turn into a pile of leaflets.