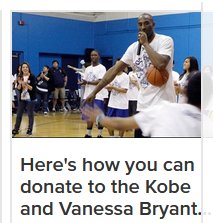 Well, it’s not to the actual people. It’s to the Kobe and Vanessa Bryant Foundation which:

The Kobe and Vanessa Bryant Foundation was founded in 2006, originally called the VIVO Foundation. The charity was created in an effort to financially support young people in “life-changing experiences designed to broaden their global perspectives,” according to the Foundation’s mission statement. Change lives it did- since it’s [sic] creation, the charity initiative also provided countless scholarships for minority college students and youth worldwide, as well as worked with the Make a Wish Foundation.

I am sure someone could count the actual scholarships, but that’s beyond modern journalism.

As far as donating, thanks, but I have my preferred and mostly local charities I support.

Not all are local and not all are local to me now (Feed My People and Nurses for Newborns are in St. Louis, not far from places I’ve lived). I also support three or four Friends of the Library organizations, the Wilson’s Creek Battlefield Foundation, and the church, but I am leery of large national organizations and sports figures’ organization, and organizations with nebulous goals. I’m also not a fan of giving in response to a triggering event (a death, a disaster) but recognize they do prompt other people who don’t give as a matter of course.

That’s my charitable philosophy. Not that you asked. But I’m sure if you click one of those links above, you can find a way to give. If you are the sort you responds to a triggering event or blog post.