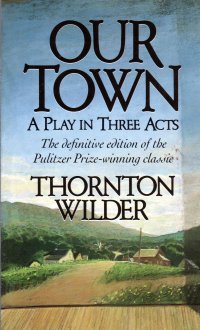 For some reason, I had gotten it into my head that this particular play was one of the most popular plays produced by high school theatre groups. I have no idea where I got that idea–I am pretty sure it predates wide adoption of the World Wide Web–but if it’s true, I can see why. The play has a lot of characters, and most of them have a manageable (that is, few and easily memorized) set of lines. Perfect for kids getting their feet wet on stage with a couple of more involved roles for those who are natural at it and will go to Hollywood in a couple of years to have their dreams crushed. Also, it’s a play within a play!

So, about the play: It’s a high-level view of a town in three acts. The main role is the Stage Hand who narrates and breaks the fourth wall to exposit a lot about the town and its inhabitants which are kind of treated like it’s a play, but the people in the play don’t know it (hello, Mr. Shakespeare). The acts focus on two families at home, the town doctor and the paper editor, with wives and two children each. A bit slice-of-lifeish, with the first when the kids are young, the second when the son of one family is going to marry the daughter of the other, and the third at the too-soon funeral of the now-married daughter who communes with townspeople who have predeceased her.

So it’s not a very plot-driven play, as there’s no central story to it. A lot of characters walk on and have a couple of lines, sometimes about irrelevant other towns people (threads that are knit loosely into the play, but aren’t central to it). It reminded me a lot of The Time Of Your Life by William Saroyan, and I see they are contemporaneous (have I used that word in two straight book reports? Indeed.). Too many characters, too little intensely driving them.

Although I guess I liked this one a little better since it sort of celebrates bourgeous values more, although the overarching message might be one of subtle Existentialism.

This is the second of the four books that I bought this month at ABC Books (the first, of course, was The Heart in Hiding, a poetry collection). Given that the other two are also plays, it is entirely possible that I will have read them all by the next time I go to ABC Books. At which time, should it be so, I will proudly announce it to Mitchell and/or Mrs. E. So now it’s a goal (much like my goal to read all of the books I bought at Calvin’s Books last year before the end of the year–a goal I met, gentle reader).