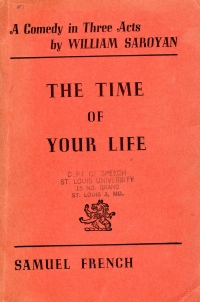 It took me two tries to make it through this book, a single full evening play that says it’s in three acts on the cover but is actually five acts. That’s not why it took me two attempts, though.

It’s a thematic play set in a dive bar in San Francisco on the eve of World War II (written in 1939, this edition came out in 1941). The cast is quite a few people: A guy who has a lot of money with no visible means of support; a simple man who does errands for him; a man who keeps trying to call a woman he loves on the payphone; a guy playing the marble game (a forerunner of pinball); an Arab who basically spouts two ‘profound’ lines over and over; a black guy who can play the piano; a guy who wants to be a comedian but is not funny; a woman of the night; a vice detective; the bartender; and a couple of others who have a couple of lines and disappear.

So you can tell it’s a very busy play with all of these people interacting with themselves and a full stage.

The text of the play is very patter-like interaction between these characters along with a whole lot of stage direction that identifies more than stage directions. They include treatises on the characters’ back stories and whatnot that really don’t belong in a play. The play itself follows a long introduction by the playwright which is a pre-war essay on the importance of art in a time of militarism or something. To be honest, I might have read it the first time I tried to read the play, but I bailed on it this time after I couldn’t understand what the playwright was trying to get at.

It reminded me a little of Picasso at Lapin Agile, which I saw staged by the Clayton Community Theatre almost twenty years ago, but with less of a point.

I have a new thesis: Twentieth (and the beginning of twenty-first) century art and literature is a triumph of theme over plot or characters. The rise of the university put the academics at the forefront of “art,” and, as they give outsize weight to theme over the other elements of art. Plots and characters are hard. Themes are easy and allow one a very easy, and unfortunately obvious way, to expound on a moral or political message without having to really engage the viewer/reader. This play would serve as evidence.

Apparently, it’s the middle of a trilogy, but I’m in no hurry to read the other four (let me explain the joke: It says it’s a play in three acts, but it’s actually five, so…. get it?)