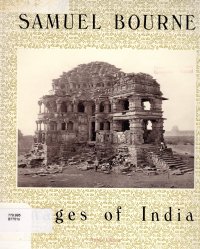 I had thought this might be a good book to browse during football games, but it turned out not. The book is actually weighted heavily to text, in small print, that talks about the photographer and his trips (well, trip to India which lasted roughly seven years) and the hardships of taking piles of photographic equipment of the middle nineteenth century into the Himalayas and around the Indian subcontinent.

In most cases, I decry a heavy text-to-image ratio in art and photography books, but in this case, I found it suiting since the story of his treks and whatnot were more informative and interesting than the photographs themselves. I mean, we have a couple mountain passes, a couple portraits, and a couple forts/monasteries, with an occasional figure thrown in to give a sense of scale (and sometimes the best part of viewing a photo was playing Where’s Waldo? in trying to pick out the tiny human in front of the great mountains). But they are mostly landscapes, interesting undoubtedly in their time to viewers who had not actually seen photographs of these places before. But here in the 21st century, we have it all in IMAX.

So I found the photos themselves less interesting than the contemporaneous Civil War pictures of Matthew Brady as the latter has historical significance. But the story of getting the images from this book are far more interesting than Brady’s photography given that Brady had pretty level ground and roads to get there.

Bourne was a principle in a photography shop called Bourne and Shepherd that sold prints of the photos Bourne and his partner took as well as doing portraits and official photography and whatnot. Founded in 1863, this business just closed in 2016. Which itself is fascinating.

So worth a read (22 pages, but two columns and small type) even more than a browse. It helps if you can remember the historical context, though: people seeing actual pictures of far away lands and being able to buy them for their own homes.

This is a former Springfield Art Museum library book which I just picked up last May, but the last date stamped (!) into the book is 1990. So no one has (probably) looked at this volume in thirty years. Which seems kind of sad, but it will probably languish on my bookshelves for that long as well unless my estate sale is sooner than that.