So my boys’ school has a program that pairs kids from higher grades with kids from lower grades for a bit of story time and crafts. The program is called Big Friend/Little Friend.

So one of the the Christmas projects is a candle holder wherein the urchins paste some tissue paper squares on glass.

In his 2nd grade year, he made a little one when he was a little friend. We put it on the little mirror shelf that is the only real repository for knick-knacks and figurines at Nogglestead. It’s been up there ever since with a collection of little candles we’ve acquired in various places.

Now, in his 6th grade year, he’s on the Big Friend side of the equation, and he made another with his Little Friend. However, as he was older, he grabbed a Mason jar instead of a little votive.

I thought it would make a poignant photo of how the boys are growing. 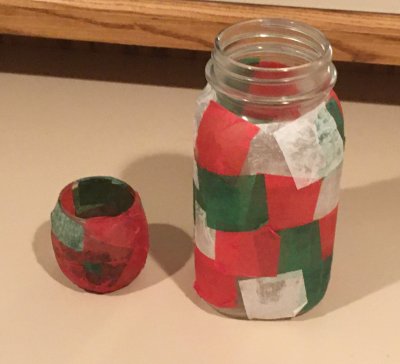 I was going to end with a quip about how I hope the youngest does not expect the Mason jar to go on display as well, but in picking up the small votive, it broke. I have picked it up to dust it once or twice in the last four years (maybe three times), but when I grasped it by the lip of the votive, the glass broke and was only held together by the tissue paper. So even the small votive won’t be on display.

So, suddenly, we’ve gotten a different life lesson from this act of photography. I’m not sure what it is. Tempus Fugit, and whatever the Latin is for “sometimes in setting up the artifice of a photo to illustrate life lessons on my little-read blog creates its own bad lessons.”