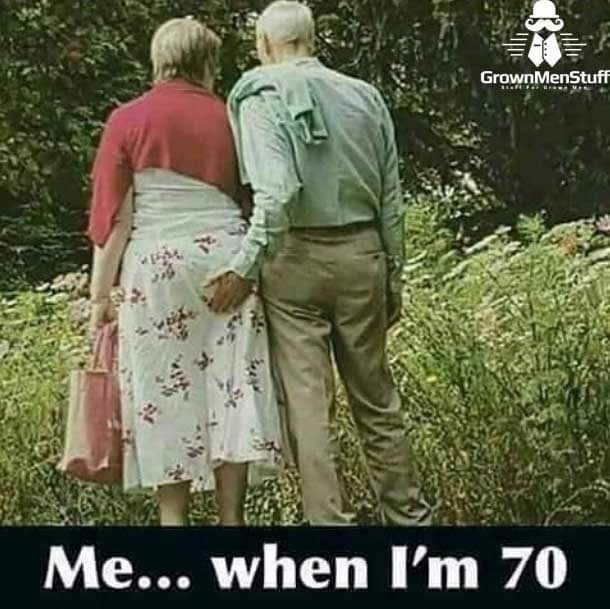 It didn’t resonate with me as me. Which is not to say I’ll not be grabbing my beautiful wife in, erm, twenty or so years (that soon?).

It reminds me of a guy I worked with in the print shop circa 1996. Kenny had worked at the shop since The War, forty years by then, and he’d worked with a lot of the employees for a long time as well. I find it hard to believe now, but many of the employees had been with the shop for decades, having moved with it from the city of St. Louis out to the then-hinterlands of O’Fallon sometime in the 1960s. So these people had worked together a long, long time.

A woman named Della worked on the bag presses as a boxer. Every day for innumerable years, she took bags as they came off the printer and after they’d run through the glue and folding channels, and she placed them in boxes. Whenever she would walk by Kenny’s little t-head press, he’d hoot and catcall her. And she was someone’s grandma probably. Maybe great grandma.

But Kenny had known her when they were younger, and maybe she was quite a looker in the 1950s. So he still made suggestions that he should probably consult his doctor before attempting, and she laughed at him.

I thought it might make an interesting novel: A tight knit group who’d work together a long time gets blown up when the woman in this case, who has flirted with a male employee for decades, looks at her retirement and finds it wanting so she sues the company for allowing sexual harassment. I think I got as far as naming a few characters, but that was it (twenty-some years ago).

In the actual print shop, though, there as no tension, and Della might have been flattered.

So as I get older, like Kenny, I shall likely continue to make suggestive remarks even as I advance to an age where that will make me a goat. Because of Kenny. And the Spenser novels. And my wife, who will become even more beautiful (although I’m not sure how the math works on that).