So as I was laying up the Halloween costumes in the closet, I noticed I had some old grey socks in a bin with some overflow underwear I culled from a crowded drawer at some point or another. 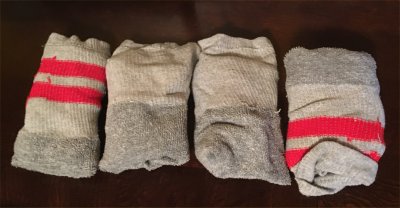 How old are those socks, you might ask (but probably not). Over thirty years old, gentle reader. Over thirty.

From 1996 to 1998, before I began my career in computers, I operated a Didde-Glaser 175 two color offset printing press in O’Fallon, Missouri.

One of the second shift printer operators nicknamed me “Inky,” as I might have been a little messy. I learned to wear black jeans and black sneakers as reflex blue ink does not stand out on them, and I bought grey athletic socks to tone down the flash of white between the jeans and the shoe. I’m pretty sure that’s the only time I’ve bought socks like that, so these would indeed be getting into their third decade.

I recently bought a couple pairs of athletic pants to replace some old ones that I’d worn out with frequent trips to the gym. However, the current style seems to be a little form fitting. To the point that I feel like I’m going to stand out of them whilst doing squats. So I was going to turn this into an object lesson for my oldest child who is really into name brands as, I suppose, youth often are.

“These are Michael Strahan’s,” I said, pointing to the athletic pants. I had prepared my lecture about how the fact that they were a premium brand meant little since they wouldn’t actually serve my athletic needs, that I should have just gone to Walmart.

But he sidetracked my planned life lesson when he didn’t know who Michael Strahan is. I explained a couple of things: New York Giants defensive end. Today Show co-host. Apparently, a clothing magnate.

I did say that as a “premium” brand, it was probably of better quality than what I would buy at Walmart and wear out in a couple of years.

I got to my final point, and the knowledge that brings this whole post together:

“When my grandchildren come to a sleepover with Grandma and Grandpa, I’ll wear these pants to bed.”