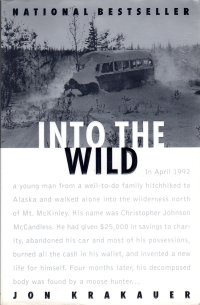 I bought this book at Calvin’s Books at the beginning of the summer, and I have set as a goal to read all five of those books this year. I know, it’s one of my twee goals, but it might represent the only time in the last couple of years that I have read all the books I bought at once within the year I bought them.

At any rate, I rage-read this book. It angered me quite a bit. The author says:

When McCandless turned up dead in Alaska and the perplexing circumstances of his demise were reported in the news media, many people concluded that the boy must have been mentally disturbed. The article about McCandless in Outside generated a large volume of mail and not a few of the letters heaped opprobium on McCandless–and on me, as well, the author of the story, for glorifying what some thought was a foolish, pointless death.

Which is exactly how I feel (and I even know how to pronounce opprobrium these days). This is a hagiography of a well-to-do young man from a messed-up family who gave up his comfortable lifestyle after college to wander the country as a vagabond and who had too much confidence in his own abilities, which led to a poor decision to live off the land in Alaska that proved fatal. The author presents this kid as a pilgrim, as an ascetic, and as perhaps as an example to emulate–without the fatal consequences, of course.

I have to wonder who made this book a National Bestseller–as the cover touts. I have to expect that it was done by people who had that sort of wanderlust and sense of invincibility who did something like it and survived (like the author) or people who wanted to do something like it and think they would have done better (likely not). I don’t know. I was four years younger than the subject of the book, so the book is set and is published around my formative years, too. Perhaps there’s something in the 1990s zeitgeist that supports the sort of behavior that no longer exists–or perhaps the young men who would have done something like this, the cross-country car trip with no money or the desire to live off the land (but not in quite as hospitable environment as Alaska) now are in the basement playing video games or covering their faces and taking to the street to start a riot.

The author expands upon his original article (I assume, since these sections seem to be grafted onto the narrative) by adding stories of other people who have wandered out into the wilderness in Alaska and a fellow who wandered into the desert in the 1930s. The author also includes a story about one of his individual expeditions that ended in failure but not in death. He visits the abandoned bus that served as the subject’s base camp and where he died. And he appends an artificial coda of helicoptering the parents in to visit the bus as well.

At any rate, yeah, the subject is not an exemplar of anything positive. He was a poor (rich), misguided young man. I didn’t relate to him much–we both had newspaper columns in the college rag (which means the names Biden and Trump both appear in this book from 23 years ago). He read The Death of Ivan Ilyich. I don’t like to speak negatively of the dead or speak to a hurtful event in a family, but this book is a misguided opposite of that.

I think the book might have triggered a bit of latent classism in me, as I couldn’t think of many in my cohort doing anything like this, and I consider mountain climbing as a rich kid’s game. But I was urban poor and then rural poor in the Midwest. Maybe rural and urban poor in the mountains do free climbing for fun, but they certainly cannot afford a lot of gear and to travel for their hobby.

I must have mellowed; although this book is a paperback, I didn’t throw it at any point. Although I did curse at it a bit. It took me over a week to go through 200 pages. But I’m glad to be done with it.

And as to my twee goal: I still have a Barbara Ehrenreich book to go through. In hardback. So that might block my goal of reading these five books this year.