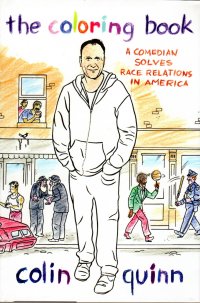 Well, it has happened: I have finally been reduced to reading an actual Coloring Book to pad my annual reading statistics. Oh, how the might he? have fallen.

You might know Colin Quinn as the guy who was the anchor of Saturday Night Live‘s Weekend Update for five years, but I didn’t watch it then. I know him as the guy from A Night at the Roxbury and the announcer from MTV’s Remote Control.

The subtitle of this book is A Comedian Solves Race Relations in America. Which it does not, really. The book is part a musing on race relations, but mostly a memoir of Colin Quinn growing up in multi-ethnic Brooklyn in the 1970s. “Growing up” might be a misnomer; some of it deals with his pre-adulthood, but a lot of it deals with his early adulthood when he was an ass and drank a lot and did a lot of drugs.

But it does make some interesting points. I do think that race relations were better in the old days, where we had just had normal human friction amongst groups and individuals, not the dialed-up Meaningful animosity. I didn’t grow up in Brooklyn, but I was living in the projects in the era he describes, and I was enmeshed within a vibrant community of different races, backgrounds, and cultures, and we could laugh at each other’s caricatures. Maybe it’s that I was younger then and am different now, but I don’t think so. I think the environment has changed a lot. I mean, I close the shades when watching Blazing Saddles and Airplane! now, and I would have been comfortable watching it with black friends then.

But the book itself is broken into different chapters talking a little about different races blending in Brooklyn at the time, how Quinn related to them, and the drugs and alcohol he consumed. You’ve got lengthy chapters on black, Puerto Rican, Jews, Irish, and Asian immigrants, and then you’ve got some clearly tacked-on short chapters at the end about Europeans and Arabs. But the book bifurcates between the musings on race and the memoir, and it really doesn’t do justice to either theme.

This was actually the second of the books I read from Calvin’s Books this year; I read it before Into the Wild, but I wasn’t sure if I had anything serious to say about Race in America to go along with it. However, I guess not. So the book reports are out of order. Not that you were keeping track. But I am.