Which is weird; I am on a couple for my martial arts school and run one (The Legion of Metal Friends). So it’s not as though I’m unfamiliar with the concept. However, I’m not actively looking to increase my engagement with the intrusive behemoth at this time, thanks.

Which is weird, because Facebook recently killed a large group:

Recently, Facebook deleted without warning or explanation the Banting7DayMealPlan user group. The group has 1.65 million users who post testimonials and other information regarding the efficacy of a low-carbohydrate, high-fat diet. While the site has subsequently been reinstated (also without warning or explanation), Facebook’s action should give any serious person reason to pause, especially those of us engaged in activities contrary to prevailing opinion.

So I’ve fixed one of their Group come-ons for them: 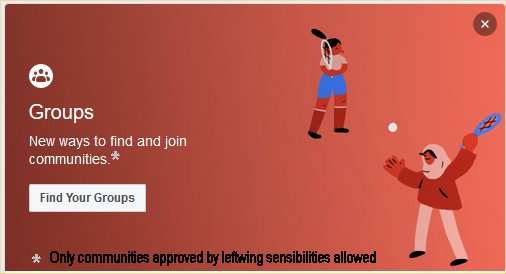 Of course, I’m just incensed that Facebook reminded me of my recent anniversary a day late. Thanks, Facebook. I can make that mistake on my own.